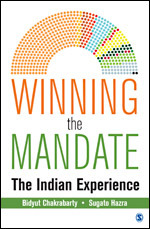 This book captures how electioneering has changed over the years and how media and marketing have assumed more significance than party manifestos.

On 16th May 2014, India witnessed the result of an intense political campaign. Those who were vanquished felt that this was due to the success of a marketing blitzkrieg, which actually pollutes a democracy. Again, for those who supported the eventual winner—the Narendra Modi-led BJP—it was a great victory.

Viewed either way, India’s national election for the 16th Lok Sabha in 2014 will remain a landmark in the annals of political campaigns. The work is thus a study of campaign strategies, how they are framed, the role of local actors and to what extent individuals rule over ideologies and vice versa.

An important contribution to the study of India’s 2014 General Elections.

Bidyut Chakrabarty is Vice-Chancellor, Visva Bharati, West Bengal. He was Professor in the Department of Political Science in University of Delhi till November 2018. He completed his PhD from London School of Economics and has been associated with teaching and research for more than three decades. He has taught in several prestigious educational institutions, such as the London School of Economics; Indian Institute of Management (IIM) Calcutta; Monash University, Australia; National University of Singapore; Hamburg University, Germany. Professor Chakrabarty has authored several textbooks and academic books. Among his publications are... More About Author

Sugato Hazra, Senior Adviser, DTA Consulting, has a Master’s in Economics and more than 30 years of experience in banking, government, Industry chamber and media. He has also worked with two large corporate groups on economic and policy issues. More About Author