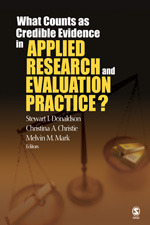 Share
Other Titles in:
Evaluation | Research Methods & Evaluation
288 pages | SAGE Publications, Inc
Download flyer Recommend to Library
What Counts as Credible Evidence in Applied Research and Evaluation thoroughly covers one of the most fundamental issues facing applied research and evaluation practice today – what counts as sound evidence for decision making? An internationally renowned line up of authors explore a wide range of issues that address the fundamental challenges of designing and executing high quality applied research and evaluation studies. Readers will come away from this volume with a new and clear understanding of the philosophical, theoretical, methodological, political, and ethical dimensions of gathering credible evidence to answer fundamental research and evaluation questions across diverse disciplinary boundaries and "real world" contexts.
Preface
Acknowledgments
About the Editors
About the Contributors
PART I. INTRODUCTION
1. In Search of the Blueprint for an Evidence-Based Global Society, by Stewart I. Donaldson
2. Social Inquiry Paradigms as a Frame for the Debate on Credible Evidence, by Christina A. Christie and Dreolin Fleischer
PART II. EXPERIMENTAL APPROACHES AS THE ROUTE TO CREDIBLE EVIDENCE
3. When Getting It Right Matters: The Case for High-Quality Policy and Program Impact Evaluations, by Gary T. Henry
4. Randomized Control Trials: A Gold Standard With Feet of Clay? by Leonard Bickman and Stephanie M. Reich
5. What Is Credible Evidence in Education? The Role of the What Works Clearinghouse in Informing the Process, by Russell Gersten and John Hitchcock
6. Evaluation Methods for Producing Actionable Evidence: Contextual Influences on Adequacy and Appropriateness of Method Choice, by George Julnes and Debra Rog
PART III. NONEXPERIMENTAL APPROACHES FOR BUILDING CREDIBLE EVIDENCE
7. Demythologizing Causation and Evidence, by Michael Scriven
8. Evidence as "Proof" and Evidence as "Inkling," by Jennifer C. Greene
9. Reasoning With Rigor and Probity: Ethical Premises for Credible Evidence, by Sharon F. Rallis
10. Seeing Is Believing: The Credibility of Image-Based Research and Evaluation, by Sandra Mathison
11. Toward a Practical Theory of Evidence for Evaluation, by Thomas A. Schwandt
PART IV. CONCLUSIONS
12. Credible Evidence: Changing the Terms of the Debate, by Melvin M. Mark
Epilogue: A Practitioner’s Guide for Gathering Credible Evidence in the Evidenced–Based Global Society, by Stewart I. Donaldson
Author Index
Subject Index

"[The book's] design is a good one, containing papers for, papers against, and papers offering a synthesisand summing up."

This strengths of this book are that it offers a thorough exploration of data as evidence and importantly, it identifies the implications for applied practice

An essential textbook for about 2 thirds of my PG Research skills students but not all of my students as not all are following a social science pathway.

A really well-balanced and constructed discussion of the deabtes around appropriate evaluation research design and method.

I have also recommended it to colleagues at other Universities.

Stewart I. Donaldson is Professor and Director of the Claremont Evaluation Center, and Dean of the Schools of Social Science, Policy & Evaluation and Community & Global Health at Claremont Graduate University.  Dean Donaldson continues to develop and lead one of the most extensive and rigorous graduate programs specializing in evaluation.  Dr. Donaldson is currently serving as the Director of the American Evaluation Association’s (AEA) Graduate Education Diversity Internship (GEDI) Program and recently served a 3-year term on the AEA Board. He leads the Certificate for the Advanced Study of Evaluation Program at Claremont... More About Author

Christina A. Christie is a Professor and Head of the Social Research Methodology Division in the Graduate School of Education and Information Studies at University of California, Los Angeles. Christie specializes in educational and social policy and program evaluation. Her research focuses on the factors and conditions that influence evaluation practice in an effort to strengthen our understanding of evaluation as a method for facilitating social change. She has published extensively and her work appears in journals such American Journal of Evaluation, Children and Youth Services Review, Evaluation and Program Planning, Studies in... More About Author

Melvin M. Mark is professor of psychology at the Pennsylvania State University, where he also is Head of the Department of Psychology.  He has served as President of the American Evaluation Association (AEA).  He was Editor of the American Journal of Evaluation (and is now Editor Emeritus). A social psychologist, Dr. Mark has wide ranging interests related to the theory, methodology and practice of evaluation, as well as a general interest in the application of social psychology to evaluation and applied social research. Dr. Mark’s awards include the American Evaluation Association’s Lazarsfeld Award for Contributions to... More About Author