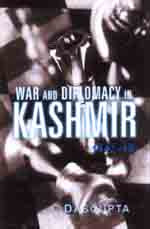 Share
Other Titles in:
Peace Studies/Conflict Resolution
December 2001 | 240 pages | SAGE India
Download flyer Recommend to Library
Based on declassified documents, the book throws new light on the roles played by Mountbatten and the British service chiefs in the Kashmir war of 1947-48 and explains why India took the Kashmir issue to the UN, why it did not carry the war into Pakistan and why it accepted a ceasefire. Examining archival material that has not been looked at previously and attempting an important reassessment of Mountbatten's role, the book highlights the fact that India's first Governor-General was not a mere constitutional figurehead. The book shows that he used -- and abused -- this authority to ensure that the conflict in Kashmir did not escalate into a full-scale inter-dominion war.

A study of British policy in Kashmir must begin with an examination of the strategic interests of Britain in the subcontinent. The book explains the diplomatic background to the military developments of the time, tracing the evolution of British policy on Kashmir and its orchestration of the moves of western powers in the Security Council. The book provides details from the British archives about the secret understandings between Commanders-in-Chief of the rival armies to contain the conflict. It reveals, for instance, that India's Commander-in-Chief, General Bucher, had tried as early as March 1948 to negotiate an informal truce with his counterpart in Pakistan, without the knowledge of the Indian government. A revealing study about a controversial incident in India's military history, this is a timely book, especially in the post-Agra Summit period.

The role played by the western powers in the Security council

How Mountbatten used and abused his authority to ensure that the Kashmir issue did not escalate into a full-scale inter-domain war.

Introduction
Junagadh
A Curtain Raiser
Crisis in Kashmir
The Defence of Srinagar
Reactions in London
Jammu Province
The Governor-General as Mediator
Military Plans
Counter-Attack or UN Appeal?
The Security Council
A Private Initiative
The Spring Offensive
The UN Commission for India and Pakistan
Limited Offensives
The Last Round
Ceasefire
Conclusion

C. Dasgupta had a distinguished career in the Indian Foreign Service, including postings as ambassador to China (1993–96) and the European Union (1996–2000). In addition to diplomatic history, his interests include global environmental issues. He is currently a member of the Prime Minister’s Council on Climate Change and a Distinguished Fellow at The Energy and Resources Institute (TERI). In 2008, the President of India conferred on him the Padma Bhushan award. More About Author