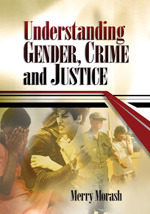 Share
Other Titles in:
Criminology & Criminal Justice | Sociology | Women & Crime
July 2012 | 328 pages | SAGE Publications, Inc
Download flyer Recommend to Library
Why are there pronounced gender differences in rates of criminal victimization? Does gender influence the response of the criminal justice system and other parts of the community to offenders and to crime victims? What part does gender play in the etiology of illegal activities committed by both males and females? Understanding Gender, Crime, and Justice takes a contemporary look at such questions and considers areas that are often neglected in other books on gender, crime, and justice.

In the last three decades, there has been an explosion of theory and related research relevant to gender, crime, and justice. Author Merry Morash, a well-known feminist scholar in the field of criminal justice, acquaints readers with key breakthroughs in criminological conceptualization and theories to explain the interplay between gender and both crime and justice. Understanding Gender, Crime, and Justice pays especial attention to race, ethnicity, and immigrant groups, and provides a unique comparative perspective.

Includes first-person accounts from crime victims, workers in the justice system, male lawbreakers, and women engaged in prostitution to give insight into a diversity of experiences and standpoints

Parallels the effects of gender and sexual orientation in laws, in patterns and causes of victimization, and in the responses of the justice system to both victims and offenders

Integrates international examples to place U.S. experiences in a comparative perspective and to show gender inequities on a worldwide scale

Understanding Gender, Crime, and Justice is an ideal textbook for undergraduate and graduate courses that focus on women and criminal justice. The book is also a valuable asset for gender courses in sociology and for women's studies programs.

Merry Morash is Professor at the Michigan State University School of Criminal Justice, where she served as director from 1991 to 2001.  She also is founder, Director and faculty instructor of the Michigan Victim Assistance Academy, which provides education for individuals who work with crime victims, and the Director of the  Michigan Regional Community Policing Institute, and is Secretary of the Michigan DARE Advisory Board.  Her primary research emphasis is on gender and crime, and current research is on domestic violence among Asian Americans and gender responsive programming for women offenders.  She also has done... More About Author