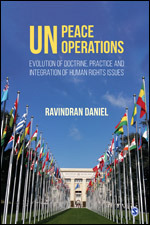 Share
Other Titles in:
Peace Studies/Conflict Resolution | Political Science & International Relations
January 2022 | 328 pages | SAGE India
Download flyer Recommend to Library
UN Peace Operations: Evolution of Doctrine, Practice and Integration of Human Rights Issues examines the UN Charter and other associated documents that laid the foundations for peace operations, discussing the evolution of peacekeeping doctrine in the pre- and post-Cold War years. It reviews the incorporation of new thematic areas in peace operations and studies the human rights components in them.

The book examines UN’s response to global peace and security issues in the last 70 years and discusses the national, regional and global contexts in which the peace operations were deployed. Operations of importance are analysed by providing background to the conflicts and discussing the challenges faced. The book includes insights from the author’s first-hand experiences in Timor-Leste (East Timor), Libya and Sudan and offers policy recommendations. It would be of interest to scholars of politics, international relations, law, sociology, modern history and, especially, peace and conflict studies.
Foreword by Ian Martin
Acknowledgements
Introduction
Legal Framework, Initial Doctrinal Evolution and Thematic Classification of Operations
Operations Contributing to Decolonization and Responding to Post-Independence Crisis
Operations Deployed in Conflicts Arising from the Cold War and Its Aftermath
Operations Responding to Intra-state Conflicts
Operations Deployed in Conflicts due to Transition to Democracy from Authoritarian Rule
Operations Deployed Post US-led Interventions
Second Phase in the Evolution of Peace Operations Doctrine: 1992—2015
Use of Force: An Unresolved Issue of UN Peace Operations
Integration of Thematic Areas in Peace Operations
Human Rights Component in Operation: First Phase—1990–1998
Human Rights Component in Operations: Second Phase—Post 2000
Human Rights Component in Operations: Case Studies of Timor-Leste, Sudan and Libya
Bibliography
Index

Ravindran Daniel is an independent expert member of the UN Working Group on the use of mercenaries as a means of violating human rights and impeding the exercise of the right of people to self-determination. He is an expert in international human rights law, with more than 30 years of experience in working on human rights at local, regional and international levels. He specializes in conflict and post-conflict situations. He was the Director of Human Rights Divisions in East Timor, Libya and Sudan of the UN Peacekeeping Operations. He has held senior positions in the Cambodia and Uganda offices of the Office of the High Commissioner for... More About Author