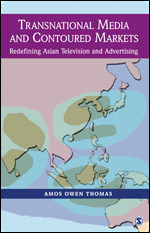 Share
Other Titles in:
Media Policy | Television & Radio
May 2006 | 268 pages | SAGE India
Download flyer Recommend to Library
"A well-documented model of the mosaic of factors shaping the applications and implications of transnational satellite television in Asia. His survey of the very extensive literature relevant to the issue is comprehensive, systematic and perceptive."
—William H. Melody, Delft University of Technology

"Both the macro and micro contexts of this important global phenomenon are captured in a highly comprehensible manner with well-constructed arguments and evidence to back them up."
—Arvind Singhal, Professor and Presidential Research Scholar, Ohio University

In a world increasingly polarising into media-rich and media-poor nations, the rapid spread of satellite and cable television has triggered a vigorous debate on the globalisation of media and markets. At the beginning of the twenty-first century, media and communications technologies have been converging at an unprecendented pace worldwide. Transnational Media and Contoured Markets brings a multi-faceted perspective to bear on the transformation of the broadcast and advertising industries in Asia at the turn of the century.

Drawing on case studies of satellite and cable channels across South, Southeast and Northeast Asia, the author argues that the globalisation of the media and advertising can only be understood within the broader context of economic, political, social and cultural processes within nation states, subnational regions and transborder ethnic communities. Additionally, this book raises the deeper socio-ethical issues of relentless globalisation for developing countries and transnational economies worldwide.

The book is an important contribution to understanding transition media in the context of globalising advertising. The book would be most useful for advertising practitioners and media planners, as well as to scholars undertaking research in the field of media globalization and advertising.

A really valuable contribution to the field of study…. The book provides an excellent analysis of changes in the media in Asia in the 1990s and explores the process of globalization in advertising as characterized by a hybrid of global and customized strategies.