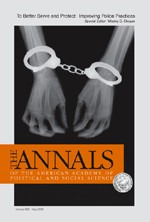 Share
Volume: 593
Series:
The ANNALS of the American Academy of Political and Social Science Series
Other Titles in:
American Government & Politics | Criminal Justice | Police Studies
May 2004 | 208 pages | SAGE Publications, Inc
Download flyer Recommend to Library
''When the issue of racial profiling by police departments came to light, it became a hot topic for criminology researchers. The conspicuous role of the American police touches a nerve, and often puts politics in the driver's seat of research in this area. ''However, learning more about police operations is important from both a scientific and policy analytic standpoint as well. As the social and political environment changes and new investigative and prevention technologies appear, it is critical to understand the impact these external influences have on the efficiency, effectiveness and fairness of policing. ''One of the most comprehensive reports of research on police departments was released in 2004 - the National Research Council's report Fairness and Effectiveness in Policing: The Evidence. Summarizing four decades of research, the report keeps a watchful eye toward policy significance. ''This volume of The Annals touches on many of the themes included in the National Research Council's report. Yet it goes well beyond restating the reportÆs principal themes. The contributors to this special issue take many of them further, and in newer directions, than an official report allows, and they offer innovative perspectives on the condition of American policing. ''Scrutinizing the role of existing research in the field of police studies, this issue goes on to cover important topics such as current trends in police organizations; how the publicÆs perception of police restraint and fairness shape police images; the effectiveness of tailored responses versus a one-size-fits-all approaches; the role of public support in determining the success of a department; issues surrounding police supervision and self-management, and more. ''With a balanced look at both policy and practice, this issue will help social scientists and policy makers alike gain a clearer view of the police landscape. It elevates the research in this field to a new level and provides a sturdy foundation for future studies and new policies, including policies toward research itself.