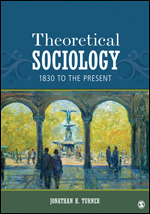 Share
Other Titles in:
Social Theory
October 2012 | 936 pages | SAGE Publications, Inc
Download flyer Recommend to Library
Written by award-winning scholar, Jonathan Turner, Theoretical Sociology: 1830 to the Present is a monumental book that offers like no other book in sociology both in-depth and comprehensive coverage of the classical and modern traditions in sociological theorizing. This is not a shallow review of theory, but a serious effort to understand theoretical sociology from its beginnings in the 1830s to its present profile today.

Part 1 is composed of detailed analyses of the theories of the classical tradition, including the works of August Comte, Herbert Spencer, Karl Marx, Max Weber, Georg Simmel, Emile Durkheim, and George Herbert Mead. Their theories are examined in detail and depth. As a result, the reader gets much more than a surface primer on the classical tradition; rather, analysis of each theorist in the classical tradition is comprehensive and deep, giving a reader a true understanding of the power of the ideas developed by theorists of the classical era. Part 1 closes with a long chapter summarizing how each of the key figures in sociology's early pantheon influenced the development of contemporary theory, examined in Part 2.

Part 2 of the book examines all of the principle theoretical traditions in sociology during the modern era. Each chapter is long because both the diversity and depth of work in each theoretical approach is examined, including the functional, general systems, ecological, evolutionary, conflict, exchange, symbolic interactionist, role and status, dramaturgical, phenomenological, structuralist, cultural, postmodern, European-critical, and American-style critical theories.

Part 3 reviews the state of sociological theory today. First, the elements that make theory scientific are outlined. And then, Turner explores how to overcome roadblocks that have prevented sociological theories from realizing their full explanatory power. Coverage spans both classical and contemporary theoretical sociology, with an eye to giving readers complete coverage of theoretical sociology.

This one book is resource for both the classical and contemporary courses, thus providing a unified book for readers in a wide variety of theory courses.

Found this text extremely useful in preparation for sessions for me lectures. The text gives an excellent overview to classical theorist in sociology.

This is an excellent volume, which I will encourage students to access when thinking about specific theoretical concepts or key thinkers. However, given the structure of the module, it could not be adopted as a core text.

The content of this book is consistent with the course outline. Discourses are objective and relevant/adoptable.

This is a remarkable book, it gives depth and clarity across the sociological theory range in Turner’s inimitable post-positive style (that declaration puts people off but…) that attempts to make analytic models and present modern propositions from classical, modern and contemporary social theory; with I have to say some considerable skill.

The coverage is very, no… very very good, the depth is ‘postgraduate’ and it is rather accessible if you have undergraduate sociology knowledge.

This is a must for postgraduate sociology; taking historical narrative in sociology to a post-positivist and pragmatist dimension that offers propositions that are applicable to research from long dead sociologists and situates them in modern and up to date sociological theory.

Really good stuff if you warm to Turner’s analytic style…. I do.

This book provides a great depth of insight into a comprehensive variety of sociological theory. The layout lends itself to an easy reference book for dipping into when in search of clear understanding of otherwise complex issues - all be it at a slightly higher readership level then I had expected. I feel that this text is more suited to level 4 or 5 study as opposed to the level 3 course I had in mind.

A vital text to any teaching of sociological theory. Good for both tutors and students and already being used in 1st year teaching and from September, 2nd level too. Both readable and enjoyable.

This book is clearly organised and provides a relevant insight into some of the fundamentals of Sociological theory.

I decided to go with the Applerouth and Edles text.

Jonathan H. Turner (PhD, Cornell University) is Distinguished Professor of sociology at the University of California at Riverside and University Professor for the University of California. The leading authority on sociological theory, Dr. Turner is the author of 38 influential books, which have been published in twelve different languages, as well as the author of many research articles in numerous journals and books. More About Author