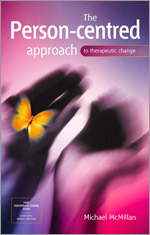 `It is an honour to be asked to write a foreword for this new book by Michael McMillan. I have been excited about this book ever since I read early drafts of its first two chapters some time ago at the birth of the project. At different times thereafter I have read other parts and my consistent impression has been that this is an author who has both a sophisticated academic understanding of the material and a great skill in communicating that widely. Those two qualities do not often go together!

The book is about change. After a first chapter in which the author introduces us to the person-centred concept of the person, chapter two is devoted to the change process within the client, including a very accessible description of Rogers' process model. Chapter three goes on to explore why and how change occurs in the human being, while chapter four introduces the most up-to-date person-centred theory in relation to the nature of the self concept and its changing process. Chapters five and six explore why change occurs in therapy and the conditions that facilitate that change, while chapter seven looks beyond the core conditions to focus on the particular quality of presence, begging the question as to whether this is a transpersonal/transcendental quality or an intense experiencing of the core conditions themselves.

This is an intensely modern book particularly in its postmodern emphasis. Rogers is sometimes characterised as coming from modernist times but he can also be seen as one of the early post modernists in his emphasis on process more than outcome and relationship more than personal striving. The modern nature of the book is also emphasised by a superb analysis of the relationship between focussing and person-centred therapy in Chapter five, linking also with Polanyi's notion of indwelling in this and other chapters. In suggesting that in both focussing and person-centred therapy the therapist is inviting the client to 'indwell' himself or herself, the author provides a framework for considering many modern perceptions of the approach including notions such as 'presence' and ' relational depth'. Also, the link with focussing is modern in the sense that the present World Association for the approach covers a fairly broad family including traditional person-centred therapists, experiential therapists, focussing-oriented therapists and process-guiding therapists. Important in this development is the kind of dialogue encouraged by the present book' - Dave Mearns, Strathclyde University

The belief that change occurs during the therapeutic process is central to all counselling and psychotherapy. The Person-Centred Approach to Therapeutic Change examines how change can be facilitated by the counsellor offering empathy, unconditional positive regard and congruence.

The Person-Centred Approach to Therapeutic Change outlines the main theoretical cornerstones of the person-centred approach and then, applying these, describes why change occurs as a result of a person-centred therapeutic encounter. The author explores the counselling relationship as an environment in which clients can open themselves up to experiences they have previously found difficult to acknowledge and to move forward.

Integral to the person-centred approach is Carl Rogers' radical view that change should be seen as an ongoing process rather than an alteration from one fixed state to another. In Rogers' view psychological health is best achieved by the person who is able to remain in a state of continual change. Such a person is open to all experiences and is therefore able to assimilate and adapt to new experiences, whether 'good' or 'bad'.

By focusing explicitly on how change is theorized and facilitated in counselling, this book goes to the heart of person-centred theory and practice, making it essential reading for trainees and practitioners alike.

The Concept of the Person
Vulnerable, yet Fundamentally Trustworthy
Personal Change through Counselling
An Overview of the Process
The Evaluation of Experience
The Complex Nature of the Self-Concept
Experiencing and Psychological Movement
Why Change Occurs
The `Necessary and Sufficient Conditions' for Facilitating Change
Beyond the `Necessary and Sufficient Conditions'
The Notion of Presence
The Challenge Facing the Client
Being Oneself in the Twenty-First Century


`It is an honour to be asked to write a foreword for this new book by Michael McMillan. I have been excited about this book ever since I read early drafts of its first two chapters some time ago at the birth of the project. At different times thereafter I have read other parts and my consistent impression has been that this is an author who has both a sophisticated academic understanding of the material and a great skill in communicating that widely. Those two qualities do not often go together!' - Dave Mearns, Strathclyde University

This was interesting but not quite what was required for my students.

This is essential reading for students and practitioners of the person-centred approach. It includes an in-depth analysis of the applications of PCT. This is all achieved in a compound volume although the book is densely written.

Great to refer to personally, only use from time to time in lectures as others are better for me.

Concise overview of the person-centred model of change. Useful addition to core texts.

A good concise and practical book. Will benifit health care workers who are begining to integrate counselling theory to their practice.

The focus on therapeutic change facilitated by Person Centred therapeutic counsellor qualities is central to my teaching. This book captures the change process in a way that is accessible to undergraduate students.

PDF file of the introduction

Working at Relational Depth in Counselling and Psychotherapy

Developing the Practice of Counselling