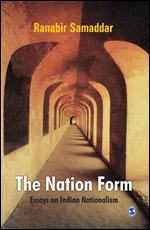 Share
Other Titles in:
Nationalism | Political Science & International Relations | South Asia Studies
May 2012 | 292 pages | SAGE India
Download flyer Recommend to Library
Most writings on the theme of the nation confine themselves to discussions of ideology and thoughts on nationalism, leaving out the question of the form of the nation. This selection of writings by Ranabir Samaddar fills in that void and presents a whole range of dimensions, perspectives, and controversies of the last two decades on the question of the nation in India. It looks at the form of the Indian nation in terms of contests, contradictions, classes, and nationalist strategies of inclusion and exclusion, thereby addressing two significant issues in view of the nation form—its relation with democracy and the problem of governing the nation.

This selection not only comprises essays that stand on their own merit, but also, in totality, presents a historical summary of the nation’s experience through decades—before and after Independence.

Introduction: The Conflicts and Contradictions in the Nation Form
The Manifold Meaning of Territoriality in Nationalism
What Was Asia to the Asians?
The Birth of a Nation
Promises of Revolution
The Dynamics of Passive Revolution
The World of the Edges
Legality, Illegality, and Reasons of State
Cartographic Representations and Anxieties
Shefali
The Ineluctable Logic of Geopolitics
The Autonomous Spaces within the Nation
Index

Ranabir Samaddar is the Director of the Calcutta Research Group, Kolkata, and belongs to the school of critical thinking. He has worked extensively on issues of justice and rights in the context of conflicts in South Asia.Samaddar’s particular researches have spread over a wide area comprising migration and refugee studies, the theory and practices of dialogue, nationalism and postcolonial statehood in South Asia, and new regimes of technological restructuring and labour control.His recent political writings The Emergence of the Political Subject (2009) and The Nation Form (2012) have signalled a new turn in critical postcolonial thinking... More About Author