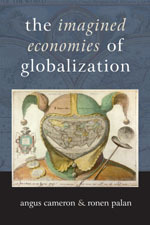 '...amongst the most important books yet written on globalization'

"In this original and very accessible work Cameron and Palan make a major contribution to the narrative turn in political economy. Skillfully combining sustained theoretical critiques and contemporary empirical analyses, this politically engaged book promotes a paradigm shift that sheds new light on the changing relations among the economy, the political, and the social. It will quickly become a major reference point for its account of globalization as a persuasive story and a flawed reality. I recommend it unreservedly"

How do theories, discussions and debates about globalisation shape the very subject they reflect on? How are conceptions of the state, society and politics are changing in the age of globalisation?

This book critically introduces the main contemporary debates on globalization and demonstrates how conventional versions or narratives of globalization have served to shape policy responses at both state and corporate levels.

Rather than accepting the disintegration of the state thesis, the authors present an alternative transition from the nation-state as a homogenous `imagined community', to a more complex and fluid series of normative economic spaces or `imagined economies'. They illustrate how this respatialization of the contemporary state is rapidly taking shape in concrete institutions, processes, people and places serving to recast the boundaries of the social, political and economic in fundamental ways.

My work lies at the intersection between international relations, political economy, political theory, sociology and human geography. I have been working for many years on three interrelated areas. I am particularly interested in state theory and in the changing nature of the state and modes of governance in the contemporary globalised economy. I have written on the changing nature of the state in the age of globalisation. I am interested not only in the most powerful states, but also in the smallest states in the world, the tax havens, which have become, together with offshore finance, a second area of research interest. I have done in... More About Author

Social Changes in a Global World