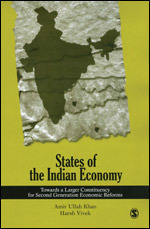 Share
Other Titles in:
Development Economics | Development Studies
November 2007 | 260 pages | SAGE India
Download flyer Recommend to Library
The phenomenal rise of India in the global economy has been attributed to a whole host of factors, the major ones being the focus on economic reforms and the demographic dividend that India currently enjoys due to its demographic transition. The large pool of human capital - a young, talented and well-educated workforce - is one of the major drivers of economic growth in the country. Rapid strides in knowledge-based industries, especially information technology, biotechnology and pharmaceuticals; rejuvenation of the manufacturing sector, revolution in the agriculture sector; and, resurgence in exports have made India one of the fastest growing economies in the world. A market-oriented approach to development, opening up of the economy and the growing economies of scale and scope for Indian enterprises, access to 'modern' technology - especially information technology - and growth in entrepreneurship have made India a sought-after destination for foreign investment.

The authors argue that this situation is a result of the implementation of a set of first generation economic reforms, initiated primarily by the Central government but the responsibilities of which are now on the State governments. To carry the second generation of reforms forward in a meaningful manner, action has now has shifted to the states.

With this background, this book primarily examines the following:

- The economic performance of various Indian states during this period

- Identifies sectors that have done well and those that need substantial improvement in terms of adoption and implementation of reform measures.

The approach of the book is quite different from that of the other books on Indian economy. The language used is simple, clear and exact, making the reading enjoyable. The pictorial explanations deserve special appreciation. The font size and the style of printing make the reading easier….On the whole, the book is a very useful contribution to the existing knowledge and is an updated version of the Indian economy.

Journal of Social and Economic Development

A valuable resource for students and researchers of economics, politics, history and sociology the book takes a detailed look at the state of the Indian economy post liberalization. It lists out reasons as to why certain sectors have thrived while others have lagged behind.

Recommended read for a macro view.

The authors of this lucid volume, both connected with the India Development Foundation, have done a tremendous job. They have rightly identified the states as pivotal actors in second-generation economic reforms, especially on sectors to the developed, namely agriculture and irrigation, both major and minor. This book is a goldmine of facts and figures.

Amir Ullah Khan is an economist working as a Senior Policy Advisor with the Bill and Melinda Gates Foundation. He graduated in Electronics Engineering from the Osmania University. He then studied at the Institute of Rural Management, Anand (IRMA). He has a Ph.D. from Jamia Millia Islamia Central University, Delhi, for his work on ‘Intellectual Property Protection and the IT Industry’. He is currently the President of The Glocal University, Saharanpur. He is also the member of the Advisory Council and the Academic Council at the Glocal University.In 1993, he joined the Indian Civil Service after which he worked for four years with... More About Author

Harsh Vivek graduated in Economics from the University of Delhi and has a post-graduate diploma from the Institute of Rural Management, Anand (IRMA). He has worked with leading research organisations like the International Water Management Institute (IWMI) and also with the country’s leading national industry association— the Confederation of Indian Industry (CII). He is currently a Research Associate with India Development Foundation. His areas of interest include small and medium enterprise development, economic reforms, market access for the bottom of the pyramid and the triple bottom line. More About Author