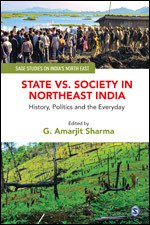 Share
Series:
SAGE Studies on India's North East
Other Titles in:
History | Political Science (General) | Sociology
July 2021 | 353 pages | SAGE India
Download flyer Recommend to Library
State vs. Society in Northeast India: History, Politics and the Everyday looks at a state as an entity that does not operate strictly as a rational, legal and administrative organization. State in the Northeast region is very much shaped by the social, economic and political practices on the ground. Using archival and ethnographic evidences, the book questions notions of region and border as fixed spaces. A state, in the process of governing society, produces itself through formal and informal practices on the ground, and the book argues that Northeast India is a significant site for studying this. It engages with conceptual, theoretical and methodological challenges thrown up by the political experiences of ordinary people in the Northeast. The book discusses everyday legal discourse, official public memory, development discourse, cases of becoming marginalized, resistance and ways of networking with the authorities. The objective is to understand the various ways in which state and society engage with each other; and to look at layers of historical interconnections that inform much of contemporary Northeast politics. The book will especially be of interest to scholars in politics, history, sociology and anthropology.
Acknowledgements
Introduction
PART I: State, Region and Border
Anup Shekhar Chakraborty
Social Imaginaries, Minorities and the Postcolonial History of a Region
Santosh Hasnu
Colonial State and Annexation of Cachar in a Strategic Frontier of British Bengal
Sherin Ajin
Spatializing Nation at the Border District of Arunachal Pradesh
PART II Memory, Ethnicity and Civil Society
Jangkhomang Guite
Public Spaces and the Politics of Remembering in Northeast India
Oyindrila Chattopadhyay
The Socio-spatial Politics of ‘Tribal’ and ‘Non-Tribal’ in Meghalaya
Rashi Bhargava
Interrogating the ‘Civil Society’ in Naga Society
PART III Security, Emergency Laws and Protest
M. Amarjeet Singh and R. K. Sanayaima
Politics of Counterinsurgency and the Expansion of Security Bureaucracy
Chubatila
Emergency Law in Nagaland and State’s Classification of People as Suspect
L. Basanti Devi
Encountering the State in Manipur: A Political History of Women in Public Space
PART IV Development, Trans-nationality and Accessibility
G. Amarjit Sharma
The Trajectory of ‘Development’ in a Resource Frontier
Tanmoy Das
Development Schemes and How People Engage with the State in Manipur
Amiya Kumar Das
Informal Political Networks, Dalals and Local Governance in Assam
Index

G. Amarjit Sharma is an Assistant Professor at the Special Centre for the Study of North East India (SCSNEI), Jawaharlal Nehru University (JNU), Delhi, India. He has previously taught political studies at Nambol L. Sanoi College, Bishnupur District, Manipur (2009–2013). He has been associated with a summer institute on Critical Global Humanities at the Brown International Advanced Research Institutes (BIARI), Brown University, USA (2011). He was associated with the Peace Research Institute Oslo, Norway, and collaborated on a project titled ‘Making Women Count for Peace’. He has published papers in the journals such as Economic &... More About Author