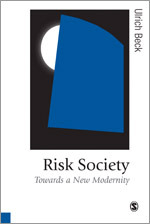 Share
Series:
Published in association with Theory, Culture & Society
Other Titles in:
Political Theory & Thought | Social Theory
July 1992 | 272 pages | SAGE Publications Ltd
Download flyer Recommend to Library
7. Science Beyond Truth and Enlightenment? / 8. Opening up the Political / Index
Scott Lash and Brian Wynne
Introduction
PART ONE: LIVING ON THE VOLCANO OF CIVILIZATION - THE CONTOURS OF THE RISK SOCIETY
On the Logic of Wealth Distribution and Risk Distribution
The Politics of Knowledge in the Risk Society
PART TWO: THE INDIVIDUALIZATION OF SOCIAL INEQUALITY - LIFE-FORMS AND THE DEMISE OF TRADITION
Beyond Status and Class?
'I am I'
Gendered Space and the Conflict Inside and Outside the Family
Individualization, Institutionalization and Standardization
Life Situations and Biographical Patterns
De-Standardization of Labour
PART THREE: REFLEXIVE MODERNIZATION: ON THE GENERALIZATION OF SCIENCE AND POLITICS
Science Beyond Truth and Enlightenment?
Opening up the Political

This is a challenging book with a bold thesis which fully deserves the widespread attention it has provoked since its publication. In it Beck not only sets out a philosophically informed sociological theory of contemporary Western societies but also provides a framework within which environmental politics can be understood, explained and developed. While firm in criticising those who claim Western societies are "postmodern", Beck also offers an immanent critique of modernity's failed promises. What Beck claims is that contemporary society is at the cusp of a transition between "industrial society" and "risk society".... To conclude, "risk society" could be viewed as the "morning after" the industrial night(mare) before, with "reflexive modernization" as the "hair of the dog", a necessary but not sufficient condition for dealing with risk. A sobering analysis indeed!
Environmental Politics

Thoroughly attuned to complexity in ecopolitical affairs... dissatisfied with the state of these affairs... ponder[s] the problematic relationship between science and politics... offer[s] insight into how to move beyond an unsatisfactory status quo in the search for ecological rationality or sustainability.... sensitive to the ecological hazards of modernity... Risk Society appeared in German in 1986, and its substantial impact in German social science looks set to be repeated in the English-speaking world. To Beck, the contemporary crisis is not of modernity but within modernity. The question is... how to make the best of modernity; as Beck puts it, to move from the semi-modernity of industrial to modernity proper
Policy Sciences

Risk Society is incredibly thought-provoking and has quickly established itself as one of the most significant works of contemporary social analysis. A book of enormous breadth, it raises several issues of critical importance in contemporary society.... there are many memorable phrases and passages throughout the book which lead colour to the disturbing subject matter
The Ecologist

Provocative. Beck's discussion of the politics of risk societies is particularly insightful, and contributes to a more complete and critical understanding of advanced modern societies
Political Studies

Ulrich Beck's remarkable book Risk Society gives one cause to think again about whether a new model might not be becoming available for thinking about our times, in not an unhopeful spirit. Beck's book, published in Germany in 1986 and successful enough there to have sold more than 60,000 copies and turned its author into a regular columinst... Risk Society displays a real sociological imagination
Radical Philosophy

Beck's book, in the tradition of German critical theory, provides a panoramic and abstract overview of contemporary society as dominated by technical risk... The greatest strengths of Risk Society are its rich theorizing and its global, often original, insights into the nature of contemporary social forces. Beck explains that society fights the `devil of hunger' with the `Beelzebub of multiplying risks'. He also claims that, in industrial society, the driving force is `I am hungry' whereas in risk society it is `I am afraid'. Such gripping conceptualisations are the mark of a distinguished essaysist, as Beck is. He astutely observes that we have succeeded in being skeptical about the methods of science but not about the application of science. Likewise Beck says that in the risk society we have replaced the politics of voting with faith in progress
Environmental Values

Beck puts forward an intriguing argument: global endangerment is replacing class society and its alliances as an organizing principle. Whereas in earlier class-based societies only the proletariat was victimized, in the emerging worldwide risk society all groups - even the rich - are threatened...He makes the important point that risk and class positions overlap on a national and an international scale...Risk Society is a bold and imaginative treatise...vivid passages and sparkling metaphors...scholars, graduate students and patient general readers concerned with risk, social theory, or global social change will find reading it well worth their effort...(the) book addresses the cultural and moral dimensions of risk perception with compelling arguments. (It) also makes clear that social theory cannot truly explain contemporary society without carefully accounting for the roles played by science, technology, and cultural construcitons of risk
Contemporary Sociology

This is a book of central political and social importance; it is vital that it triggers off and animates public discussion in this country as it did in Germany. After all, the greatest of risks our risk-infested society carries is the indifference to the risk aspects of our individual, sectional and global actions
Times Higher Education Supplement

This analysis of the condition of Western societies made a 'big splash' when it was first published in German... The English translation will most probably help this important text of contemporary sociology to find its place among other typifications of society as postindustrial or postmodern... Here is a book which is very relevant to current debates about the social dimensions of the so-called 'post-modern society
Social Compass

Ulrich Beck is Professor of Sociology at the University of Munich. He is the author of Counterpoison (1991) and Ecological Enlightenment (1992). More About Author

Social Changes in a Global World