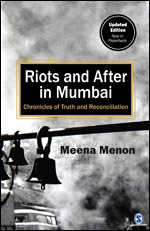 Share
Other Titles in:
Political Sociology | Social & Cultural History | Urban History
December 2011 | 308 pages | SAGE India
Download flyer Recommend to Library
Riots and After in Mumbai provides a synoptic record of events in Mumbai, focusing essentially on the history of riots in the city. Using this framework, it attempts to understand the sociopolitical and cultural realities of present-day Mumbai through a collection of narratives of the people affected by the communal riots of 1992–93.

The author uses a novel approach, combining historical records from the pre-Independence era (1893–1945) and personal interviews of both Muslims and Hindus living in the city. It also looks into the political manipulations that ordinary people of both communities alike are subjected to by the ruling powers and political parties.

This book will help the reader form a bridge between the Mumbai's past and present in order to better understand the relations between the two communities. On the one hand it undercuts the cosmopolitan image that the city holds, and on the other, speaks volumes of the reconciliation—without any real justice—that has happened over the years in the minds of the people who live together despite much brutality and strife.

The author delved deep into the archives and came up with vivid accounts of how Bombay suffered periodic communal tensions and riots since the 19th century…The author deserves credit for her original work…. Recounting history is often absorbing but here it is more agonizing.

A veteran reporter goes back to the Mumbai riots 20 years after they happened…Menon’s whole book is unvarnished; a raw, pavement-pounding investigation of how—or whether—truth and reconciliation have shaped the afterlife of a rioting, rioted-upon city two decades after the Babri Masjid demolition in December 1992....Its deeper, more literary truths all lie in between its lines, and they are not about truth and reconciliation, but about an unresolved sorrow.

Meena Menon’s treatise, Riots and after in Mumbai deals with future threats and the time bomb on which Mumbai sits. Menon provides hope by suggesting that the inner strengths of the city and the collective-cooperative character of Mumbaikars will save it from likely communal clashes…This book is a reality check, so that liberals and well-meaning optimists can overcome their complacencies to realize their ardent hopes.

The book gives ornate details of the trauma suffered by many of the victims of the carnage of 1992-93, and is a requisite read for all those who wished to understand the complex sociopolitical fabrics prevailing in the commercial capital of India.

[The book] illuminate the studyscape of riots that are darkened by sundry enticing falsehoods and dangerous half-truths with the plain truth, the author has traced, met and written the varied (poignant and defiant) tales of victims of riots. There is a strong human element here…[The author] narrates tales of ordinary persons who survived the riots in an ordinary language. The unexpected extraordinary resilience shown by so many justice-denied victims, Hindus and Muslims that has been captured by the author represents the best part of the book.

A gritty and compassionate rendering of the lives of those charred by its fires. It is both a fascinating foray into the past — looking up reams of archival material to trace the antecedents of communal riots in the city — as well as a meticulous tracking down of hundreds of victims in far-flung suburbs like Mulund and Mira Road. This book will remain significant for a number of reasons: Firstly, the author expresses the importance of not letting events hang loose as fragments of history — they have to be recovered and represented in a way that helps people make important linkages with the past. Secondly, fascinating in itself, amazing archival material pieced together to trace the history of communal strife in the city. Thirdly, the  author looks at the status of cases registered during the riots, as well as the status of the Shrikrishna Commission Report, fourteen years after its completion.

The book ably demonstrates how the city has developed over the years facing communal and political violence, riots, clashes and terrorist attacks every now and then...Menon brings out interesting, important and lesser known facts about Thackrey’s association... [It] is one of the most valuable additions on the subject, dealing with entire gamut of questions related to riots and after in Mumbai. For anyone interested in the past and present of violence in Mumbai, it is a must read.

Meena Menon is Deputy Editor with The Hindu, Mumbai. She has been a journalist since 1984 and has worked with the United News of India (UNI), Mid-day, and The Times of India. In 2004, she published Organic Cotton: Reinventing the Wheel. Prior to this, she co-authored The Unseen Worker: On the Trail of the Girl Child, published in 1998. She has received fellowships from the National Foundation of India, New Delhi; Centre for Science and Environment, New Delhi; Panos London, London; and Sarai–CSDS (Centre for the Study of Developing Societies), New Delhi. She writes on politics and developmental issues including environment, women, human... More About Author