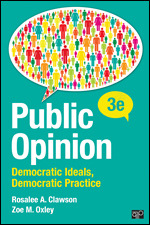 “Clawson and Oxley’s book is impressive: it offers broad coverage of the relevant areas of interest, but places public opinion in the context of the broader democracy…I especially appreciate the coverage of political trust.”

“I like that Public Opinion: Democratic Ideas, Democratic Practice helps my students think more deeply about the processes by which citizens learn about politics, the motivations behind their beliefs, and the biases they bring to political thinking.  It facilitates a more sophisticated understanding of citizens as political actors.”

“Clawson and Oxley’s Public Opinion: Democratic Ideals, Democratic Practice is smart, yet accessible to my students. I appreciate that its length and organization has allowed me to use it for both quarter and semester length courses”

Rosalee A. Clawson is professor of political science at Purdue University. Her research focuses on public opinion, mass media and politics, political psychology, and the politics of race, class, and gender. Her work has been published in the American Political Science Review, Public Opinion Quarterly, Political Communication, Journal of Black Studies, and Global Environmental Change. She is the coauthor of Legacy and Legitimacy: Black Americans and the Supreme Court.   More About Author

Zoe M. Oxley is professor of political science at Union College. Her research interests include the effects of the media on public opinion, gender and public opinion, women in electoral politics, and political psychology. Her work has been published in the American Political Science Review, Journal of Politics, Political Research Quarterly, Politics & Gender, and PS: Political Science and Politics. More About Author