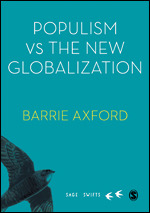 Populism and globalization are shorthand for the temper of our times. Populism is usually cast as globalization’s nemesis, a backlash against worldwide connectivity, while globalization is often said to be in retreat or even demise.

This book takes issue with both interpretations, claiming instead that while populism of all shades tends to be anti-globalist, the globalism it is pitted against has changed dramatically in recent years and is increasingly decentred, destabilized, contingent, multipolar, and multidirectional. Axford paints a picture of this new globalization and dissects the strains of postmodern populism that both contest it and are its expression. Attention to the current surge of populism also affords purchase on an axial feature of our turbulent and globalized world—the imbrication or antithesis of local and global, of difference and sameness. This is an interdisciplinary examination of populism as a factor in global change, drawing on international politics, sociology, and global studies.

In this succinct overview of contemporary populism, Axford dispels the myth of the new populism's conceptual opposition to globalization. Instead, he charts the connections between the forces of the new 21st century globalization and the rise of national populism. The author brilliantly incorporates the role of localism in the emergence of populist movements and shows how these localist forces provide a new narrative for interpreting globalization in the 21st century. While populism is a very broad and fuzzy concept, the author successfully makes a meaningful and highly insightful contribution to the understanding of contemporary global politics. This book will be extremely useful for upper-undergraduate and graduate level courses on democracy, global governance and world politics.

Challenging the common view of globalization and populism as opposing forces shaping our age of instability, Axford's brilliant analysis explains the rise of "postmodern populism" as an integral feature of the current unsettled phase of globalization. Comprehensive yet accessible, this insightful book lays bare the complex dynamics and impacts of the politics of anger and resentment behind the global rise of Trumpism in a world wavering between nationalist retrenchment and globalist expansion. A must-read!

Barrie Axford’s Populism vs. The New Globalization is a truly innovative contribution, not merely to the themes of populism and globalization but, even more significantly, it constitutes a major intervention in the relationship between the pair. Populism and globalization are two of the most salient but problematic issues of our time. Axford brings them into conceptual alignment in a highly interesting, intriguing, and constructive manner. I recommend this book unreservedly.

Barrie Axford’s book offers a thoughtful tour d’horizon of contours of populism across many dimensions and from diverse intellectual vantage points. This book is a probing, insightful journey and a great read.

Professor Axford deals with two hefty ideas, populism and globalization, in a little book in his usual masterful way. Populism, commonly perceived as a nemesis of globalization, is indeed part of globalization’s fundamental dialectics. In the first decades of the twenty-first century, the world is being haunted by the specters of populism and globalization. A careful understanding of these two multi-faceted ideas and their interactions around the world, is the task Professor Axford takes upon himself and not only does he untangle the conceptual thickets but also distills the political ramifications astutely. An admirable effort.

Searching, racy, and nuanced. This is a theoretical thriller, written on the wings of contemporary events. It seeks to understand gales of change. What is this new kind of populism? What is happening to contemporary globalization? Barrie Axford writes darkly and brilliantly from inside the storm.

In this brief, densely argued book, Axford offers an analysis of the interrelationships
of globalization and populism that challenges simplistic notions
of both causality and effects. Offering a nuanced, careful exposition of core
ideas and practices embedded in both concepts, Axford argues that contemporary
globalization has empowered and framed a postmodern populism – one
informed by the mediatization of contemporary life and recently-emerged
social and economic forces linked to new forms of globalization.

Barrie Axford is Professor Emeritus in politics in the School of Social Sciences at Oxford Brookes University, where he was founding Director of the Centre for Global Politics Economy and Society (GPES). He is interested in global theory, processes of globalization, and the framing of politics by digital media. His books include The Global System (1996); Theories of Globalization (2013); The World-Making Power of New Media: Mere Connection? (2018) and 3 co-authored editions of Politics: An Introduction. He has recently co-edited Rethinking Ideology in the Age of Global Discontent, with Gulmez.B and Gulmez, D (2018) and Political... More About Author