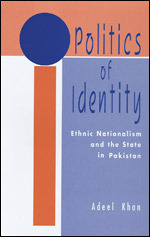 `A provocative, passionate and stimulating new interpretation of ethnic nationalism'

`An informed and lucid work that demystifies the politics of nationalism'

Howard Brasted, University of New England
A major challenge Pakistan has been confronted with since it came into existence is the self-assertion of various ethinic groups, which have actively contested the legitimacy of the state structure. However, despite the seriousness of this ethnic challenge, there exists no detailed study of these movements—Politics of Identity fills this vacuum.

Highlighting the role the state plays in the lives of individuals, the book
–Studies both the pre-colonial and colonial state system in India and the changes it effected till India’s independence and the creation of Pakistan.
–Assesses the state in Pakistan and explains its role in giving rise to ethnic discontent.
–Studies four ethnic movements—Pukhtun, Baloch, Sindhi and Mohajir—demonstrating how proximity to or distance from state power have influenced their politics.
–Critically reviews some influential theories of nationalism and shows how they have not adequately explained ethnic nationalism in some parts of the world.
Preface
Introduction: Crude Thinking
Ethnicity, Nationalism and the Modern State
Colonial State and Colonial Difference in India
Nationalisation of the Colonial State in Pakistan
Pukhtun Ethnic Nationalism: From Separatism to Integrationism
Baloch Ethnic Nationalism: From Guerrilla War to Nowhere?
Sindhi Ethnic Nationalism: Migration and Marginalisation
Mohajir Ethnic Nationalism: El Dorado Gone Sour
At a Crossroads as ‘Ever Before’!
Appendices
Bibliography
Index

`A provocative, passionate and stimulating new interpretation of ethnic nationalism'

`An informed and lucid work that demystifies the politics of nationalism'

"In spite of modernization and globalization, or perhaps because of it, ethnicity is an enduring and even growing phenomenon. Adeel's study is a valuable addition for the understanding of Pakistan."