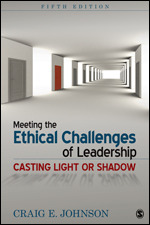 “I do not know of another text that comes close to it . . .This book is one of the best on the market!”

“The best quality of this text is its emphasis on the leader—casting light or shadow.  This theme/metaphor challenges the reader to take stock of him/herself with respect to the metaphor and encourages changes, if necessary, to be a ‘light caster.’”

“For my needs, leadership and ethics, this book delivers in ways that allow me to be an effective instructor on this topic.”

“I believe Meeting the Challenges of Ethical Leadership has been a very good basis text for the ethics courses I have taught over the last ten years.”

“I already utilize the text and my students like it… It has a fairly nice balance between the complexity of the topic and readability and understandability.”

“I use the text now in 4 classes at three colleges with excellent results. The students love this book.”

This is an essential text that will help all those interested in leadership issues to explore and reflect on the ethical aspects of the concept. A very useful and accessible resource.

This is a very thought provoking book which helps students to grapple with some of the ethical challenges and dilemmas of leadership.

This book arrived at moment in my life when I had agreed to deliver a seminar on intercultural leadership and create a symposium on academic excellence with a focus on ethics. It had been many years since I had philosophy courses in ethics and felt like I needed a significant refresher despite the fact that I felt I was au courant with the ethical challenges and issues that existed in the context or I was working. The trick was to turn endless ethical speculation into a process whereby individuals recognized the elements that were rooted in their cultural conscience and their critical personal experiences.

Certainly we live in a shadowy world, and it is that world where the authors launch the questions that are aimed at helping us cope with it and change it. On the other hand, we are too easily ready to condemn others behavior if the temptation to turn a blind eye fails us. "Moral Disengagement" can seem like the only alternative drowning in to insoluble perplexities of contemporary existence. Moral disengagement, in fact, is the theme of one of the many self-administered soundings of personal attitudes and behaviors that the book uses to bring students to engage not just ideas but to explore themselves and share with each other.
Sources of moral theory and practice from various cultures are examined with their pros and cons, or rather with an eye to what they can do and what they can't do. There is perhaps less of an emphasis on the religious roots of much moral formation that exists perhaps for more of us than we might suspect. Consistently there is awareness of and advice for “followership” as well as leadership. In life we will inevitably play both roles betimes, and it is refreshing as well as important to concentrate on behaviors that make ethical followers as well as keep leaders on track.

Teachers today are faced with classes that may be composed more of international than domestic students. This inevitably means that there are various views on what is right and wrong in everyday student life as well as going on in the world outside. We assume the telling others about differences suffices to create the awareness and the acculturation required for successfully coping with the new environment. While we may intellectually hear and recognize that there are new standards, this often does little for the innate perspectives and inclinations we bring with us. Simply put, we don't believe the new rules or recognize how seriously they may be meant—and their consequences. The usefulness of what it's found in this book lies not just in its perusal, but in its explorations that can be discussed and shared as students search for strategies going forward.

It is hard today to write a book about ethics without revealing one’s moral and ethical position and cultural orientation. The author has done a rather good job of this, but advocacy is ever present in the examples, histories and case studies chosen just in the act of choosing them. Certainly today’s world is full of ethical challenges and there is a very broad selection of them, current and up to date. In my case, my classroom frequently consists of more international students than domestic ones, so there is the challenge of opening the door to a much wider selection of issues, cultural orientations and perspectives than the largely US and Eurocentric ones that are familiar or at least recognizable to more domestic participants.

The examination of popular culture, Hollywood and Bollywood, etc., as cultural mediators provides discussable examples of leadership and ethical dilemmas. There could be more about marketing, branding, both of commercial products and group identities. We live on a planet whose “worlds” are shaped by our social constructions and this deserves more examination and enlightenment. Though we repeatedly attempt them, “universal” principles are hard to come by in a diverse world. This is becoming ever more evident and perhaps our need to construct them while paying lip service to difference can be colonization redux.

While world affairs may seem a touch speculative to undergraduate and even many graduate students, everyday behavior around social inclusion, plagiarism, cheating, and classroom behavior elicit strong feelings that in turn result in knee-jerk ethical judgments, often very uninformed. This is a powerful launching point for ethical concern and discussion.

Craig E. Johnson (PhD, University of Denver) is professor emeritus of leadership studies at George Fox University, Newberg, Oregon, where he taught undergraduate and graduate courses in leadership, ethics, management and communication. During his time at the university he served as director of the George Fox Doctor of Business Administration program and chair of the Department of Communication Arts. Though retired from full-time teaching, Johnson continues to serve as an adjunct professor. He is the author of Organizational Ethics: A Practical Approach (also published by Sage) and co-author, with Michael Z. Hackman, of Leadership: A... More About Author