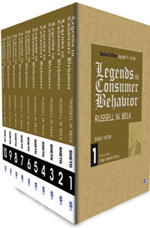 Share
Series:
Legends in Consumer Behavior
Other Titles in:
Business & Management | Consumer Marketing | Marketing
May 2014 | 3 782 pages | SAGE India
Download flyer Recommend to Library
The Legends in Consumer Behavior series captures the essence of the most important contributions made in the field of consumer behavior in the past several decades. It reproduces the seminal works of the legends in the field, which are supplemented by interviews of these legends as well as by the opinions of other scholars about their work.
The series comprises various sets, each focusing on the multiple ways in which a legend has contributed to the field. This first set in the series, consisting of 10 volumes, is a tribute to Russell W. Belk. Belk is one of the most prolific contemporary consumer behavior and marketing scholars. He authored one of the seminal papers in marketing field, “Possessions and the Extended Self.”
Russell W. Belk is the Kraft Foods Canada Chair in Marketing at the Schulich School of Business at York University in Toronto. His research involves the meanings of possessions, collecting, gift-giving, sharing and materialism and his work is often cultural, visual, qualitative, and interpretive. He is the co-founder of the Association for Consumer Research Film Festival and has over 550 publications. He is currently on the editorial boards of 20 journals and is Associate Editor of the Journal of Consumer Research. He is past president of the Association for Consumer Research and the International Association of Marketing and Development, and is a fellow in the Association for Consumer Research and the American Psychological Association. He has received the Paul D. Converse Award, two Fulbright Fellowships, Society of Marketing Advances Distinguished Marketing Scholar Award, and honorary professorships on four continents. In 2005 he received the Sheth Foundation/Journal of Consumer Research Award for Long Term Contribution to Consumer Research. Besides York, he has also taught at the University of Utah, University of Illinois, Temple University, Claremont Graduate University, and universities in Eastern and Western Europe, Asia, Africa, New Zealand, and Australia.
The series is edited by Jagdish N. Sheth, who is the Charles H. Kellstadt Professor of Marketing in the Goizueta Business School at Emory University, U.S.A. He is Past President of the Association for Consumer Research (ACR), as well as Division 23 (Consumer Psychology) of the American Psychological Association.  He is also a Fellow of APA.  Professor Sheth is the co-author of the Howard-Sheth Theory of Buyer Behavior, a classic in consumer behavior published in 1969.
This set includes:

Jagdish N. Sheth, Ph.D., is the Charles H. Kellstadt Professor of Marketing at Emory University, Goizueta Business School. He is known nationally and internationally for his scholarly contributions in consumer behavior, relationship marketing, competitive strategy, and geopolitical analysis. When he joined Emory’s faculty in 1991, Professor Sheth had nearly 30 years of combined experience in marketing from the University of Southern California, the University of Illinois, Columbia University, and Massachusetts Institute of Technology. ... More About Author