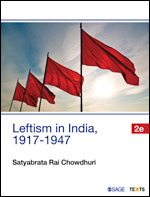 This book provides a comprehensive account of the Leftist movements in India during the most decisive phase of its struggle for freedom. It also describes how the Leftist movements interacted with the mainstream Indian freedom movement led by the Indian National Congress, guided by Mohandas Karamchand Gandhi and his ideology of non-violence. This ideology directly opposed those who believed in Marxism–Leninism and, naturally, their policies clashed at almost every stage of the freedom movement. These clashes gave rise to dramatic developments, which have been described in this book in their proper context and analysed with scholarly objectivity.

The book traces the early twentieth century socio-political awakening of the bourgeois-democratic class of Indian society, the rise of Left-wing nationalists following the Swadeshi Movement, the activities of the early revolutionaries and the formation of the Communist Party of India abroad, the growth of communism in India, the growth of the Left wing within the Indian National Congress (known as the Congress socialists) and various labour and peasant movements.

Leftism in India, 1917–1947 is an essential reading for students of history and political science, civil services aspirants and for anyone wishing to gain a thorough understanding of the origin of and the early practices of the Left in India.

‘We are in debt to Professor Satyabrata Rai Chowdhuri for writing this excellent overview of the Indian Left. This will be a very useful book for experts and for people who want an overview of the Left. His book is especially welcome because of its wide scope. Let us hope that he is planning a successor volume that will bring this remarkable story of communism in India up to the present day.’

‘Professor Rai Chowdhuri has to be congratulated on such a comprehensive coverage of not only the Communist Party history but also the Left movements in general in India. I also like his interweaving of the history of the mainstream nationalist movement with a history of the Left. There are not many books which cover the same ground and this one, I am sure, will stay a standard reference work for a long time.’

‘[This book is] one of the most lucid, nuanced and comprehensive accounts of the role of the political Left in Indian nationalism I have ever read. While many other scholarly accounts have commented on the heterogeneity of Leftist movements in India, few have attempted to delineate in such detail and with such clarity every hue, every highlight and every shade in the entire spectrum of Left politics in the era of high nationalism from 1917 to 1947. It is a task of commendable magnitude accomplished by a distinguished scholar. It will serve as an invaluable resource for both undergraduate and postgraduate students of Indian political history.’

‘Leftism in India, 1917–1947, is an excellent account of the political manoeuvres and theoretical ruminations of Indian radicals during the last thirty years of the liberation movement … [The] book is an attempt to interweave a study of the mainstream nationalist movement with not only the trajectory of the Communist Party of India, but that of the Left wing of the Indian National Congress.’

‘It is a welcome addition to the existing literature, both for its comprehensiveness and the discussion its critical conclusions could generate.’

‘The volume is definitely a significant contribution to the history of the Left movement in India. One would expect Rai Chowdhuri to come out with a successor volume that will cover the history of the communists in India and their transformation, if any at all, up to the present day, especially in the backdrop of Deng Xiaoping’s famous dictum: “To be rich is glorious, that is the Marxism of today.”’

‘It is necessary to know the early history of the Left in order to make sense of its politics today…this book brings it alive with detailed and objective accounts. The author captures remarkably well the complex milieu in which the communists and other Leftists struggled to find an identity for themselves.’

‘The book is a history of the nationalist struggle for decolonisation told from the standpoint of the Left in India, as well as an evaluation of the role of Leftism in this struggle. The result is a useful study of the impact that the communists and the Left wing of the Congress had on each other…. Rai Chowdhuri covers in great detail M.N. Roy’s role in introducing ideas of Marxism in India, Jawaharlal Nehru’s encounter with Fabian socialism, the emergence of working-class parties in urban centres and the Congress socialists’ resolve to stay within the Congress but fight for radical socio-economic changes. The very fact that this is a history that looks at different aspects of Leftism in India together must be welcomed.’

‘This is a useful reference book that highlights a rather neglected but a significant aspect of Indian politics in the early 20th century. Indeed, by tracing the origin of the Left movement in the era of the national Independence struggle, the author demonstrates how and why the Left movement came to acquire the shape it had in an Independent India.’

‘This may well be the ultimate work on Indian Leftists covering a tumultuous period—from when Lenin seized power in Russia in 1917 to when India gained freedom in 1947.’

Satyabrata Rai Chowdhuri, PhD, DLitt (1935–2016), was a renowned political scientist of his times, specializing in South Asian politics and international relations. He taught at various government colleges in West Bengal early in his career before joining Rabindra Bharati University in Kolkata where he held a long stint as a Professor and the Head of the Department of Political Science. In 2000, the University Grants Commission conferred on him the Emeritus Fellowship. Professor Rai Chowdhuri also lectured on Indian politics at the University of Oxford and was a Senior Fellow in International Relations at the Institute of Commonwealth... More About Author