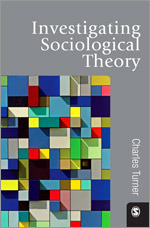 Share
Other Titles in:
Social Theory | Sociology
March 2010 | 216 pages | SAGE Publications Ltd
Download flyer Recommend to Library
"Here at last is a book that conveys the drama, excitement, and human importance of sociological theory in a sophisticated yet accessible way. It will launch a thousand conversations in classes, and provide teachers with an opportunity to discuss the big life and historical questions, while at the same time teaching a lot of sociology and theory. The book is terrific. I have nothing but admiration for it." - Stephen Turner, University of South Florida

This is an accessible, enlivening introductory book that provides a shot in the arm for all those who maintain the relevance of sociology for understanding the modern world. It will inspire discussion in classes, and provide teachers with an opportunity to discuss the big questions in theory, history, social order, and social change.

Charles Turner provides a wealth of concrete examples which demonstrate what a sociological perspective can do to unpack and illuminate everyday life. The book allows students to understand sociological theory from the inside. It moves effortlessly beyond the mere parade of great names and core ideas to introduce concepts that can be used to understand the social world in which we live, where this world has come from and where it might be heading.

Original, informed, and deftly written with the needs of students in mind this book is an antidote to arid theorizing and the dull recitation of the grand sociological tradition.

Conceptually rigorous, rich in content, grounded in wide and deep reading, thoughtfully written and judicious, Charles Turner's new book is a major addition to sociological theory... Its last sentence fittingly urges students and teachers to "keep reading". For those unfamiliar with Turner's book, I add: put Investigating Sociological Theory at the top of your reading list
Peter Baehr
Canadian Journal of Sociology

Here at last is a book that conveys the drama, excitement, and human importance of sociological theory in a sophisticated yet accessible way. It will launch a thousand conversations in classes, and provide teachers with an opportunity to discuss the big life and historical questions, while at the same time teaching a lot of sociology and theory. The book is terrific. I have nothing but admiration for it
Stephen Turner
University of South Florida

In this authoritative and strikingly original book, Charles Turner demonstrates that sociological theory far from being some dry, boring meta-discourse of society is an ethically engaged enterprise, intimately connected to the arts of living in the contemporary world. Accessible to both students and seasoned practitioners, this book is at once a terrific defence and itself an elegant example of the continuing relevance and intellectual vitality of sociological theory. Turner's brilliant discussion thoroughly deserves to resonate across the discipline of sociological theory in both its European and north American versions
Thomas Osborne
University of Bristol

This is a splendid, extremely readable book which provides a master-class in how to play off one thinker against another in developing and presenting one's own perspective. It is in the grand tradition of Sorokin, Andreski and Mouzelis and should inspire generations of advanced undergraduates and graduate students, as well as being a brilliant contribution to the professional literature
William Outhwaite
Newcastle University

We must welcome fresh approaches that make a serious attempt at rethinking the traditional textbook package....CharlesTurner’s Investigating Sociological Theory is such an attempt...Turner has managed, let us hope, to put an end to those silly introductory books, which have plagued the field for such a long time. Future introductory books to sociological theory will hopefully be written with more sense and sensibility. This could be no mean achievement
Andreas Hess
History of Human Sciences

Although an excellent book in itself, the book was too theoretical for the type of applied sociology students we have attending our health and social care courses.

After reading Turner’s book I feel a great bit smarter and knowledgeable in the field of sociological theory.

One interesting thing about this book is how Turner works backwards, in relation to many other theory presentations. First he dismantles the theories and show how the theorists make use of basic tools (Description and Categories) and artifacts (Metaphors and Diagrams). That in itself is a refreshing approach! Then he goes deeper discussing how this is rooted in attitudes, values and assumptions about sociology. As if that is not enough, Turner also moves further and discusses how sociological theory makes sense for all of us regarding the art of living. Truly inspiring!

I am really impressed and will definitely adopt the book on postgraduate courses in theory.

I like the book very much, but it is too advanced and exploratory to work on an undergraduate programme.

The book has not adopted for the course Sociology of Social Change but for a post-graduate course on sociological thoery which is still in preparation.

A really refreshing book on sociologiocal theory! Not just a repetition of the old stories.

Superb, original, cleverly designed book. Of use for postgraduate students primarily, and an valuable aid to the use of theory in research.

I very much appreciated the easy to read style which departs from the usual design of this type of subject. It is likely to keep the attention of students and certainly is comprehenisive in its coverage especially in its excellent fusion of social philosophy and ideological assumptions behind sociological theories.

This will provide students new to sociology with a comprehensive awareness of the meanings and value of theory within this mode of inquiry into our social world.

An excellent and highly readable text that clearly explains what sociological theory is and how it should be used.

This is a exciting, wonderfully entertaining and lucidly written introduction to sociological theory.

Charles Turner is an associate professor of sociology at the University of Warwick. He is author of Modernity and Politics in the Work of Max Weber (1992), Investigating Sociological Theory (2010), and Secularization (2019). More About Author