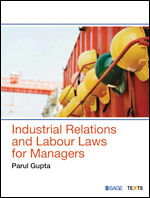 A lucid and exemplary introduction to Indian labour laws and a thorough discussion on the legislations dealing with industrial relations and labour issues.

Aiming to provide the readers with an understanding and knowledge of labour laws, this textbook presents a collection of legislations dealing with industrial relations, wages, work conditions, and social security, and legislations regulating the employment of women and children in industrial activities. It focuses on the application of labour laws to and within businesses, and deals with legal postulations from the perspective of a manager. By including a number of relevant cases and caselets highlighting various labour issues of industrial units across the country, Industrial Relations and Labour Laws for Managers helps students of human resource management as well as HR professionals to understand the legal implications in a relatable way.