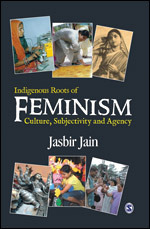 Indigenous Roots of Feminism: Culture, Subjectivity and Agency is an exploration of the historical sources across India's composite culture that have shaped the female self. Beginning with the Upanishads, it works with several foundational texts such as the epics and their retellings, Manusmriti, Natya Sastra and the literature of the Bhakti Movement in order to trace the histories of feminist questionings.

The constant interweaving of literary and social texts and the tracing of both continuities and disruptions across time and space enables a perception of the way in which individual struggles have merged with collective resistance and allowed a questioning of relationships, institutional frameworks, and traditional role models.

Feminism as an ideology is invariably linked to culture as it works with both the body and the consciousness. Indigenous Roots, without allowing itself to be submerged in excessive data, examines the validity of this belief across time to trace a connectivity with cultural formations.

Preface
A People without a History?
The Body and the Soul Epics : The Living Tradition
Working Through Space : Patriarchy and Resistance
Getting Back at Men Through God
The Nineteenth Century and After
Articulating the Self
Tracing the Difference
Notes
Bibliography
Index

Indigenous Roots of Feminism analyses the feminist movement in India in a historical perspective, free from the hangover of western concerns… Colour photos, a filmography on the representation of women in films and a comprehensive bibliography make the book complete and all-inclusive in its exploration of the native ancestry of Indian feminism.

Dr Jasbir Jain’s book dwells on the origin of feminism in India…the book is free of the jargon that seems to be mandatory in many academic books today. It is entirely accessible to anyone with an interest in the subject.

Jasbir Jain is director of the Institute for Research in Interdisciplinary Studies (IRIS), Jaipur. Formerly of the University of Rajasthan, she has headed the Department of English and has worked in various capacities including the directorship of the Academic Staff College.Jain has travelled extensively and has been the recipient of several awards. Amongst them are the Sahitya Akademi Fellowship as Writer in Residence (2009), UGC Fellow (2005–2007), Emeritus Fellow (2002–2004) and K.K. Birla Fellowship for Comparative Literature (1998–2000). Elected life-member of Clare Hall, Cambridge, she has also availed of the Fulbright Fellowship and... More About Author