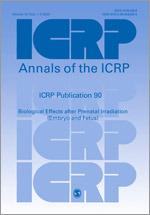 Share
Series:
Annals of the ICRP
Other Titles in:
Public Health
206 pages | SAGE Publications Ltd
Download flyer Recommend to Library
In its 1990 recommendations, the ICRP considered the radiation risks after exposure during prenatal development. This report is a critical review of new experimental animal data on biological effects and evaluations of human studies after prenatal radiation published since the 1990 recommendations. Thus, the report discusses the effects after radiation exposure during pre-implantation, organogenesis, and fetogenesis. The aetiology of long-term effects on brain development is discussed, as well as evidence from studies in man on the effects of in-utero radiation exposure on neurological and mental processes. Animal studies of carcinogenic risk from in-utero radiation and the epidemiology of childhood cancer are discussed, and the carcinogenic risk to man from in-utero radiation is assessed. Open questions and needs for future research are elaborated. The report reiterates that the mammalian embryo and fetus are highly radiosensitive. The nature and sensitivity of induced biological effects depend upon dose and developmental stage at irradiation. The various effects, as studied in experimental systems and in man, are discussed in detail. It is concluded that the findings in the report strengthen and supplement the 1990 recommendations of the ICRP.