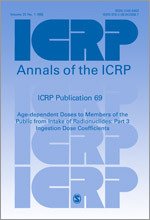 Share
Series:
Annals of the ICRP
Other Titles in:
Public Health
78 pages | SAGE Publications Ltd
Download flyer Recommend to Library
Ingestion Dose Coefficients The present report on age dependent dose coefficients to members of the public follows ICRP Publications 56 and 67. The following elements are covered: iron, selenium, antimony, thorium and uranium. This report gives parameters for the tissue distribution and retention of these elements together with data on urinary and faecal excretion. Dose coefficients have been calculated for radioisotopes of these elements which are expected to be released into the environment as a result of human activities and are considered to be of significance for environmental radiation protection purposes. The generic model structure for plutonium, americium and neptunium given in ICRP Publication 67 has been applied to thorium; the generic model structure for the alkaline earths given in ICRP Publication 67 has been applied to uranium. Where no clear evidence on age dependence of organ distribution and retention appeared to be available, the biokinetic data for adults were adopted for infants and children. This assumption was made in ICRP Publications 56 and 67, and is usually expected to lead to an overestimate of the dose coefficient. If no relevant biokinetic data were found for humans, appropriate data were based on animal experiments as far as possible.