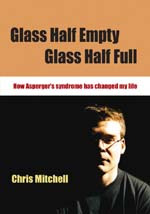 This gripping and at times astonishing story will be inspirational to all adults either facing Asperger's syndrome personally or interacting with someone who has been diagnosed.

In his own imitable style, Chris Mitchell describes his life before and after diagnosis with Asperger's syndrome. We follow Chris through primary and secondary school, where his lack of social interaction and anger continually landed him in trouble, and where he was bullied for being different. Only his excellent memory and specialist interests enable him to continue, and pass his GCSEs and a GNVQ in Media Studies.

At university, studying Journalism, he was diagnosed with Asperger's syndrome. Suddenly his life made more sense, and his self-awareness meant his self-confidence returned, resulting in world travel, a Masters qualification and finally, acceptance.

Chris Mitchell was diagnosed with Asperger's syndrome in 1998 when he was 20 years old. He has since achieved an MA (Hons) in Information and Library Management. Based in Sunderland, he is an advocate for Asperger's syndrome and speaks at many public events about the condition.

GLASS HALF EMPTY
Introduction
Childhood Memories
Moving House and School
A Traumatic Change
Stepping into the Land of Giants
My Transition into Secondary School
Changing Body Shapes
Adolescence
Coming Out of Childhood
Final Year of Secondary School and Into Further Education
Emerging Expectations
Applying to University
Starting University
An Early Misfit
Difficult Days
My Second Year at University
GLASS HALF FULL
It All Becomes Clear
My Asperger's Syndrome Diagnosis
My Return to University and Graduation
An Achievement Against the Odds
Finding My Niche
My Way in to Postgraduate Study
Mission to Mars: Visit to Australia and meeting with Garry Burge
Re-inventing Myself
Postgraduate Study
Moving Up
Finding My First Professional Role
Broadening My Horizons
Autuniv-1 to Australia, Canada and Back
Aspie of Intrigue
My Cruise Experience
A Reflection
How Asperger's Syndrome Has Changed my Life

`Chris Mitchell was 20 when he was diagnosed with Asperger syndrome. Both his academic success and the horrendous bullying he suffered highlight the mixed blessings of mainstream education for a child with Asperger syndrome. While his eventual success is heartwarming, from today's understanding of Asperger, the ignorance and hostility Mitchell faced throughout his early life are shocking' - TES Extra for Special Needs


'This autobiographical account of a young man's discovery that Asperger's syndrome could explain his early problems and provide light at the end of the tunnel, is both insightful and inspiring. Parents of children with Asperger's syndrome and also older "aspies" will profit from Chris's hard won experience' - Dyslexia Contact

'[This] is a straightforward read, full of concrete examples of how Asperger's syndrome affects the individual but at the same time acknowledging that every individual is different. Having experienced first-hand the vulnerability of the adolescent with Asperger's syndrome, desperate to make connections with those around him but constantly being knocked back, I was delighted to read about the friendships [Chris Mitchell] eventually establishes when he takes the brave decision to make contacts through the web and sets out on his travels. I would particularly recommend this book to those with little knowledge of Asperger's syndrome, especially for anyone involved in helping those with a diagnosis of Asperger's syndrome through further education' - British Journal of Special Education

`This book is a 'must-read' for any parents of children with Aspergers syndrome and also older aspies themselves. They will be able to relate to the slightly quirky writing style and profit from Chris's hard won experience. These children are so individualistic and often isolated from like minds, so the book will provide some solace that there are other people like them' - Judith Stansfield, Chair North Richmondshire Community Partnership SEN ICT Consultant NASEN ICT Group BDACC Reviews and Literature Editor

'This is an unusual book in that it is written by a man where most autobiographical books about autism are written by women. It is both very readable and well-written, with a detached an honest account of his childhood, family life and life prior to diagnosis. He gets on well with his family, and they are happy that he has written this book, and happy with the book, despite some implied criticism of how they brought him up. Indeed, it comes across as less aggressive than some accounts, so it is particularly insightful for parents and other empathotypicals who might find more black-and-white descriptions of their mistakes hurtful.

As with every book written by someone on the spectrum that I have seen, it is a short book, giving a snapshot of his difficulties and joys before and also after his diagnosis, giving highlights of specific problems and pleasures. Overall I think it would be a good book for someone who recognises himself in the author, or as a starting point for deepening your understanding of your brother, son or friend, or, if you are already interested in this condition, to broaden your understanding of the ways that it present itself' - Asperger United

Standing Down Falling Up

Mum, is That a Human Being or an Animal?

I Can't Walk but I Can Crawl

Martian in the Playground