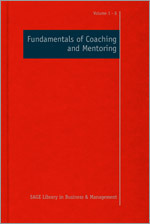 Coaching and mentoring activities are fast growing and developing across the world.  In the UK, such schemes are widespread through all types of organization – public, private, large, small and not-for-profit – and there is no doubt that coaching activity is on the rise in the whole of Europe and across the globe. Despite this growing significance, debates over what the universally-agreed definitions for either coaching or mentoring aren't being had within the academic community, and in essence this means that authors, practitioners, clients and researchers may not be discussing the same social phenomena and may be attributing different meanings to both coaching and mentoring.

This new six-volume major work therefore plays a valuable role in building a map of the topic by bringing together the most influential papers on the subject in a single resource. The volumes are organised thematically and contextualised by an introductory chapter written by editor, Bob Garvey.

Bob Garvey works with a variety of people, either one-to-one or in groups. He is an internationally known keynote conference speaker, thought leader, educator and prolific writer. Bob is an honorary board member of the International Mentoring Association (IMA) and founding member of the EMCC (European Mentoring and Coaching Council). In 2014, the trade magazine, ‘Coaching at Work’ awarded him a ‘Lifetime Achievement Award’ for services to mentoring and in 2018, he was ‘Highly Commended’ as an external coach/mentor also by ‘Coaching at Work’ magazine.  Bob is obsessed with coaching and mentoring! More About Author

The SAGE Handbook of Qualitative Business and Management Research Methods