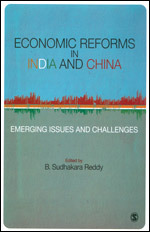 Share
Other Titles in:
Development Economics
May 2009 | 436 pages | SAGE India
Download flyer Recommend to Library
This first-of-its-kind collection summarizes current trends in the economic scenario of India and China in the backdrop of globalization and outlines not only the goals and strategies for development but also the policies to achieve those goals. It provides a frame of development by addressing various issues such as how to expand the services sector, how to keep pace with the incredible growth of the manufacturing sector and how to ensure widest possible diffusions of the huge economic gains.

Economic Reforms in India and China: Emerging Issues and Challenges presents the latest data and appraises issues pertaining to the economic reforms of India and China—two of the major contenders for global power. The two countries have followed different paths to economic growth and yet both have emerged as fast growing economies. Thus, it is interesting to know the comparative views of the growth stories of the two countries to see where they are heading. The volume brings together some of the most influential scholars in development economics from India and China. They address issues that include the governance as well as the historical perspective of globalization, poverty, inequality of income and the potential for conflict, agriculture, WTO and its relation with trade prospects, and the nature and characteristics of institutions and markets.

The compilation is a significant addition to the existing literature on development and reforms, as it puts forward in a single volume, a vast range of academic concerns—those of economists, sociologists, policy makers, agricultural scientists and research scholars.

A complete account of the causes and circumstances for undertaking liberalization and privatization.... An excellent effort with a balanced analysis and interpretation. The work is very comprehensive and commendable...a welcome addition to the existing literature in the discipline of economics and development studies.

B. Sudhakara Reddy is a Professor at Indira Gandhi Institute of Development Research, Mumbai. He has an experience of 24 years. He has been actively involved in a number of projects and has been member of prestigious bodies such as Research Advisory Committee, Institute for Global Environmental Change; Indo-China Economic Forum; Planning Board, Government of Maharashtra (1997–98); Expert Committee, Andhra Pradesh State Higher Education; Expert Group, National Hydrogen Energy Board, Ministry of Power; World Renewable Energy Congress, and so on. He has worked as consultant in United Nations Development Programme, United Nations Environment... More About Author