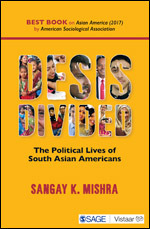 South Asian Americans, one of the largest groups of immigrants in the United States, are the most diverse community defined by religious, linguistic, economic, and generational distinctions. The experiences of Indian Americans, alongside Pakistani and Bangladeshi Americans, tell a story of social and political inclusion in which the distinctions within the groups play a significant role.

Sangay K. Mishra shows how the internal characteristics and distinctions lead to multiple paths of political inclusion, defying a unified group experience. He analyzes features such as class, religion, nation of origin, language, caste, gender, and sexuality in group mobilization.

How, for instance, has religion shaped the fractured political response to intensified discrimination against South Asians in the post-9/11 period? How have class and home country concerns played into various strategies for achieving political power? Pursuing answers, Mishra finds that while ethnic mobilization remains an important component of Desi experience, ethnoracial identity is deployed differently to produce distinct mobilizations.

“For over a hundred years settlers from South Asia have found new homes in North America, and as Sangay Mishra has shown in this important and readable account, they remain divided in their loyalties, their politics, and their cultural identities. Placing the South Asian immigrant experience into a wide context, this vital study helps us understand the transnational character of the profound demographic shifts that are reshaping our global world.”

“Sangay K Mishra’s book is the ?rst of its kind involving the politics of South Asians in the United States. Desis Divided ?lls an important gap in the study of Asian American politics and speaks to a larger literature on minority political incorporation, showing both the strengths and limitations of Desi political involvement.”

“Desis Divided brings out with remarkable erudition the complex processes and patterns of political incorporation of the South Asian immigrant community in the United States of America. Sangay Mishra is thorough in his analysis and dexterous in his presentation.  While arguing that political incorporation of the South Asian immigrant community must be understood in the specific forms that internal differentiations take, Mishra goes beyond the dominant models which give centrality to ethnoracial mobilization.  Weaving a brilliantly crafted narrative around specific life histories, themes, and empirical data, Mishra makes the complex interconnections between multitudinous aspects of political incorporation comprehensible.”

“Desis Divided is major scholarly contribution to the study of South Asian Americans. This superb study explores how national, racial, class and other divides have impeded community solidarity and political mobilization. It bridges the scholarly divide between immigration and diasporic studies by exploring the linkages between South Asian’s engagement with transnational and domestic politics. And it places South Asian immigrants in a comparative framework to illuminate their distinctive experiences.”

“Mishra paints a picture of a community whose heterogeneity has manifested itself in remarkable ways. There was so much about the South Asian American political experience that I did not truly appreciate until I read Desis Divided."

Sangay K. Mishra is Assistant Professor of Political Science and International Relations at Drew University in New Jersey, United States. He specializes in immigrant political incorporation, diaspora studies, Asian American politics, and racial, and ethnic politics in the United States. Before joining Drew University, he was a Mellon Postdoctoral Fellow at Lehigh University, PA. He received his PhD in Political Science from the University of Southern California, Los Angeles. He teaches courses on Race and Politics, Immigration, Latino Politics, and Political Theory. His current research project focuses on the transnational engagements and... More About Author

This title is for sale in South Asia only!