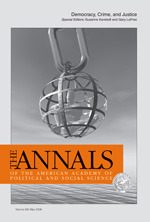 Share
Volume: 605
Series:
The ANNALS of the American Academy of Political and Social Science Series
Other Titles in:
Criminology | Political Science & International Relations | Sociology
338 pages | SAGE Publications, Inc
Download flyer Recommend to Library
As a growing number of nations embark on a path to democracy, criminologists have become increasingly interested and engaged in the challenges, concerns, and questions connecting democracy with both crime and criminal justice. Rising levels of violence and street crime, white collar crime and corruption both in countries where democracy is securely in place and where it is struggling, have fuelled a deepening skepticism as to the capacity of democracy to deliver on its promise of security and justice for all citizens. What role does crime and criminal justice play in the future of democracy and for democratic political development on a global level? ''The editors of this special volume of The Annals realized the importance of collecting research from a broad spectrum of countries and covering a range of problems that affect citizens, politicians and criminal justice officials. The articles here represent a solid balance between mature democracies like the U.S. and U.K. as well as emerging democracies around the globe û specifically in Latin America, Africa and Eastern Europe. They are based on large and small cross-national samples, regional comparisons, and case studies. ''Each contribution addresses a seminal question for the future of democratic political development across the globe. What is the role of criminal justice in the process of building democracy and instilling confidence in its institutions?  Is there a role for unions in democratizing police forces?  What is the impact of widespread disenfranchisement of felons on democratic citizenship and the life of democratic institutions? Under what circumstances do mature democracies adopt punitive sentencing regimes? Addressing sensitive topics such as relations between police and the Muslim communities of Western Europe in the wake of terrorist attacks, this volume also sheds light on the effects of terrorism on mature democracies under increasing pressure to provide security for their citizens. ''By taking a broad vantage point, this collection of research delves into complex topics such as the relationship between the process of democratization and violent crime waves; the impact of rising crime rates on newly established as well as secure democracies; how crime may endanger the transition to democracy; and how existing practices of criminal justice in mature democracies affect their core values and institutions. ''The collection of these insightful articles not only begins to fill a gap in criminological research but also addresses issues of critical interest to political scientists as well as other social and behavioral scientists and scholars. Taking a fresh approach to the intersection of crime, criminal justice, and democracy, this volume of The Annals is a must-read for criminologists and political scientists and provides a solid foundation for further interdisciplinary research.
Susanne Karstedt and Gary LaFree
Democracy, Crime, and Justice: Introduction
SECTION ONE: Democracy, Democratization and Crime
Gary LaFree and Andromachi Tseloni
Democracy and Crime: A Multilevel Analysis of Homicide Trends in 44 Countries, 1950-2000
Susanne Karstedt
Democracy, Values and Violence: Paradoxes, Tensions and Comparative Advantages of Liberal Inclusion
William Alex Pridemore and Sang-Weon Kim
Democratization and Political Change as Threats to Collective Sentiments: Testing Durkheim in Russia
Nicole Leeper Piquero and Alex R. Piquero
Democracy and Intellectual Property: Examining Trajectories of Software Piracy
SECTION TWO: Building Democratic Societies: The Role of Criminal Justice
John Hagan and Sanja Kutnjak Ivkovich
War Crimes, Democracy, and the Rule of Law in Belgrade, the Balkans and Beyond
Jeremy Wilson
Law and Order in an Emerging Democracy: Lessons from the Reconstruction of Kosovo’s Police and Justice Systems
Monique Marks and Jenny Fleming
The Right to Unionise, the Right to Bargain and the Right to Democratic Policing
SECTION THREE: Democracy and the Governance of Security: Safe Societies and Strong Democracy
Ian Loader
Policing, Recognition and Belonging
Martin Innes
Policing Uncertainty: Countering Terror through Community Intelligence and Democratic Policing
Corinne Davis Rodriguez
Civil Democracy, Perceived Risk and Safety in Brazil: An Extension of the Systemic Social Control Model
SECTION FOUR: Justice for all: Democracy and Criminal Justice
Franklin Zimring and David Johnson
Public Opinion and the Governance of Punishment in Democratic Political Systems
Christopher Uggen, Jeff Manza, and Melissa Thompson
Democracy and the Civic Reintegration of Criminal Offenders
Hung-En Sung
Democracy and Criminal Justice in Cross-National Perspective: From Crime Control to Due Process