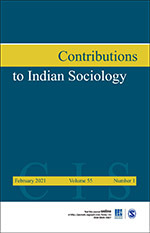 The journal presents a diversity of theoretical approaches to the study of society in India. It provides a forum for divergent views on Indian society, believing that differences of approach are born of genuine scholarly concerns. Regular features include research articles, review articles, a 'discussion' section, book reviews and notes.

Contributions to Indian Sociology is available electronically on SAGE Journals Online at http://journals.sagepub.com/home/CIS.

This journal is a member of the Committee on Publication Ethics (COPE).

Contributions to Indian Sociology (CIS) is a peer-reviewed journal which has encouraged and fostered cutting-edge scholarship on South Asian societies and cultures over the last 50 years. Its features include research articles, short comments and book reviews. The journal also publishes special issues to highlight new and significant themes in the discipline.

CIS invites articles on all countries of South Asia, the South Asian diaspora as well as on comparative studies related to the region. The journal favours articles in which theory and data are mutually related. It welcomes a diversity of theoretical approaches and methods.

CIS was founded by Louis Dumont and David Pocock in 1957 but ceased publication in 1966. A new series commenced publication the next year (1967) at the initiative of T.N. Madan with the support of an international group of scholars including Professors Louis Dumont, A.C. Mayer, Milton Singer and M.N. Srinivas. Published annually till 1974, Contributions became a biannual publication in 1975. From 1999, the journal has been published thrice a year.

SAGE is committed to upholding the integrity of the academic record. We encourage authors to refer to the Committee on Publication Ethics’ International Standards for Authors and view the Publication Ethics page on the SAGE Author Gateway

For exciting offers and deals, write to: jmarketing@sagepub.in