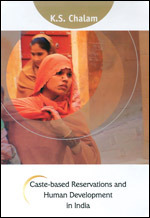 Share
Other Titles in:
Economics & Development Studies
March 2007 | 212 pages | SAGE India
Download flyer Recommend to Library
Caste-based reservations have existed in India for more than a century. Initially introduced by the British to bring equality of opportunity in education, reservation was later extended to other sectors of the development process to overcome the problem of economic inequalities attributed to caste. Even today, concepts like affirmative action and quotas are being debated to justify reservation. This book provides a comprehensive assessment of the impact of caste-based reservation on human development in India, taking into consideration the time series data.

The book also analyzes the impact of caste-based reservations on the target groups, as well as on major human development indices. An alternative strategy of applying the democratic principle of caste-based reservation is also discussed.
Preface
Introduction
Present Status of Scheduled Castes, Scheduled Tribes and Other Backward Classes
Caste and Economic Inequalities in India
Social Linkages of Artisans with Technology and Development
The Socially and Educationally Backward Castes vs Economically-backward Class
Untouchability and Poverty Among Dalits
Impact of Caste-based Reservations
Caste Reservations to Remedy Socio-economic Inequalities
Human Development Through Caste Reservations: A Study
Dalit Development in Andhra Pradesh: A Case Study of the Impact of Reservations on Development
The Alternative: Replace Caste-based Reservation with Democratic Representation
Bibliography
Index

[The book] by noted Indian economist K.S. Chalam, Caste-based Reservations and Human Development in India, is worth a read. The title is self-explanatory. Where it is quite different from similar works is how it deals with the subject of caste. It does not pre-suppose that the caste system is either bad or good. It is not moralistic in terms of calling for a movement to abolish the system. Instead, it is a truthful present-mortem of how exactly the system thwarts development making the reader wonder at the end of the book whether or how economic progress has freed India from the shackles of caste

Caste-based Reservations and Human Development in India by K S Chalam charts a difficult course…. What makes this publication interesting and worth a serious look is the route taken by Chalam. Instead of sticking to cliché’s and calls in the thin air about “social justice”, he has decided to take the road less travelled. Methodically, through data culled from NSSO rounds, the Census reports and other studies, he has constructed more than a hundred tables…. Brings a refreshing wealth of data to ground the debate on reservations in recent history.

The well-researched publication should be of immense value to those who wish to specialise in the economy of India.

The book presents a chronological description of the reservation policy in India. It also deals with the role of the state during the colonial period and independent India….The book analyses the impact of caste-based reservations on the target groups, as well as on major human development indices….Providing an informed perspective on an issue that is of immense topical relevance, this book will be of interest to students and scholars of development studies, policy planning and international relations. This book will also be useful to policymakers and practitioners working in this area.

Caste-based Reservations and Human Development in India analyses the impact of such reservations on the target groups and on major human development indices, taking into account time series data. An alternative strategy of applying the democratic principle of caste-based reservation is discussed.

The book gives a good insight into the impact of caste in all spheres of human life and all conclusions are based on statistical data rather than mere subjective interpretations…A goog book to read in the present social and economic Indian Scenario.

K S Chalam’s slim volume is an attempt to recollect the arguments for reservations, remove some ot the misconceptions that gained currency since the V P Singh government’s move to introduce the Mandal Commission recommendations, and also to look at the notion of reservations in a post-liberalised, open economy.

K. S. Chalam is a well-known political economist and educationist, and a former member of the Union Public Service Commission (UPSC), New Delhi. He has been the Vice Chancellor of the Dravidian University in Andhra Pradesh and had taught in the Department of Economics, Andhra University, between 1976 and 2005. He is known as the founder of the Academic Staff College Scheme in the country and was its first director. Dr Chalam was on the Planning Board of the Madhya Pradesh government during 2002–04. He was the recipient of the UGC Young Social Scientist Award in Economics in 1984. Dr Chalam has authored Caste-Based Reservations and Human... More About Author