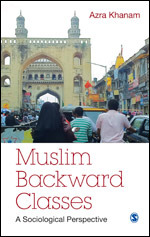 Share
Other Titles in:
Class & Inequality | Social Problems | Social Stratification
September 2013 | 314 pages | SAGE India
Download flyer Recommend to Library
This book presents the sociological perspectives on Muslim OBCs as a category determined by the Indian State. Although Muslims constitute an important part of the population and are the second largest religious community in the world, as well as in India, social scientists rarely undertake this community to analyze their socioeconomic and educational development. Muslim Backward Classes provides a comprehensive explanation of the origin and meaning of the term “backward class,” followed with the historical perspectives of Muslim backwardness in India.

The volume fills the gap in the literature and presents a broad-based picture of the problems of Muslim OBCs, highlighting the questions of justice and equal opportunity to all groups irrespective of religion.

A fresh and interesting perspective on social stratification among Muslims in India.

The work is an Interesting study of social, economic and educational condition of the OBCs among Muslims in India...the study has tried to fill the gaps in the literature on Muslims and generated empirical evidence from the data which shows under-representation of Muslim OBCs in India.

Azra Khanam has been teaching and doing research in Dr K. R. Narayanan Centre for Dalit and Minorities Studies, Jamia Millia Islamia, New Delhi since 2008. Dr Khanam did her PhD from Aligarh Muslim University. She taught as a guest lecturer at Women’s College, Aligarh Muslim University during 2003–04 and 2007–08. She has published several articles in reputed Indian journals. More About Author