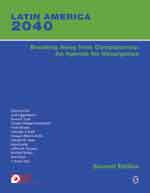 Share
Other Titles in:
Economics & Development Studies | Political Science (General)
February 2013 | 324 pages | SAGE India
Download flyer Recommend to Library
Latin America 2040 presents a longer term vision of Latin American society and economies, within which current policy debates and actions must be anchored. It presents a set of multigenerational issues that must be tackled urgently in order for countries in the region to sharply reduce inequities as well as raise their economic growth rates. While most Latin Americans have weathered the latest economic turmoil reasonably well, the fact is that the region has been underperforming Asia for the past thirty years. Much of Latin America is mired in the "middle income trap". This book argues that the current situation is untenable economically, socially and politically. At the same time, the authors believe that the region can and must aim higher and aspire to achieve much more rapid economic growth and a much faster reduction in disparities during the next three decades.

This book presents a bold and ambitious new vision of Latin America and offers an agenda for such a resurgence of Latin America. It presents a strategy for the regional economies to realize this vision by sharply raising their growth rates while achieving much more inclusive societies. This, in turn, will allow Latin America to reverse the trend of the past thirty years during which it steadily and significantly lost its share of the world economy and thus enter a new era of hope and prosperity.

Anil Sood, in his 30-year career at the World Bank, occupied many senior positions including Vice President, Strategy and Resource Management, and Special Advisor to the Managing Directors. He has since advised chief executives and senior management of a number of development organizations including the African Development Bank, the Islamic Development Bank, the United Nations Development Programme, and the United Nations Economic Commission of Africa, on matters of strategy and development effectiveness.Please contact Prof Anil Sood atCentennial Group2600 Virginia Ave NWSuite 201. Washington D.C. 20037Email: asood2@gmail.com More About Author