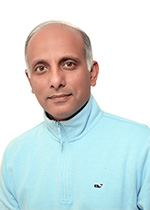 T. D. Chandrasekhar (called TD by friends) has been involved with businesses for three decades now, first as a practicing executive and later as an external expert. In his current role as a coach, a facilitator and a consultant for over a decade, he has coached over 75 executives, and facilitated over 750 corporate programmes, covering more than 15,000 executives. As an invited speaker, he has addressed over 100 occasions, including initiatives such as TEDx. His focus has primarily been on excellence, creativity and innovation both at individual and organizational levels with leading business organizations in India and overseas.

His last corporate role was as Country Head, India, of Ameriprise Financial, which he set up and led till he started on his next phase. In his executive roles, he was known to focus both on professional excellence and personal well-being of staff as he believes strongly in the concept of sustainable business success.

He also loves interacting with students and is associated as a guest faculty at educational institutes such as IIT Delhi, IIM Lucknow, MDI Gurgaon, and Vedica Scholars, where he engages in discussion on topics related to creativity and factors facilitating growth of the mindset.

At home, his three-year-old twin daughters bring him unbounded joy.