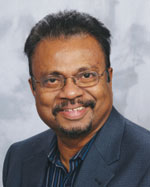 Swarnavel Eswaran Pillai, PhD, is assistant professor in the English, and Media and Information Departments at Michigan State University.

He is a graduate of the premier film school in Asia, The Film and Television Institute of India, and is an accomplished documentarian whose films include Thangam, The Indian National Army, and Villu (The Bow). His recent documentaries are Unfinished Journey (2012) and Migrations of Islam (2014), and he is currently working on Hmong Memories at the Crossroads.

He earned his doctoral degree in film studies from the prestigious University of Iowa, and his research areas include the history, theory, and production of documentaries and experimental films, and the specificity of Tamil cinema and its complex relationship with Hollywood as well as popular Hindi cinema.

His recent publications include the book Cinema: Sattagamum Saalaramum (Cinema: Frame and a Window) (2012), an anthology of scholarly essays in Tamil on documentaries and experimental films, and the essays “1970s Tamil Cinema and the Post-Classical Turn” (2014), and “Mirugavidusagam: Theatre of the Body, Ritual, and Land” (2013).