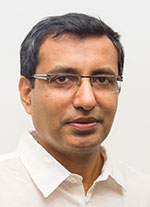 Ronojoy Sen has worked for over a decade (1997–2010) in leading Indian newspapers. He was last with the Times of India, New Delhi, where he was a Senior Assistant Editor for the editorial page. He has obtained a Ph.D. in political science from the University of Chicago and read history at Presidency College, Kolkata. He has been a Visiting Fellow at the National Endowment for Democracy, Washington, D.C., and the East-West Center, Washington, and Fellow of the International Olympic Museum, Lausanne, Switzerland. He is the author of Nation at Play: A History of Sport in India (2015) and Articles of Faith: Religion, Secularism, and the Indian Supreme Court (2010). He is the co-editor of Being Muslim in South Asia: Diversity and Daily Life (2014) and More Than Maoism: Politics, Policies and Insurgencies in South Asia (2012). He has contributed to edited volumes and published in several leading journals.

Media at Work in China and India