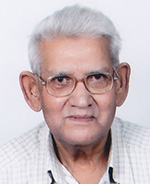 Ramashray Roy, an eminent political scientist, earned his PhD in Political Science from the University of California, Berkeley, in 1965. One of the founding members of the Centre for the Study of Developing Societies, New Delhi, he functioned as its Director from 1976 to 1982. Professor Roy was also associated with the Indian Council of Social Science Research, New Delhi, as its Director. Among many academic achievements credited to his name, some include National Fellow of the Indian Council of Social Science Research, 1993–96, Senior Fellow of the Indian Council of Historical Research, New Delhi, as well as Fellow at the Indian Institute of Advanced Study, Shimla. He taught at the University of Delhi, University of Texas at Austin and University of California, Los Angeles. He was a Visiting Fellow at the Survey Research Centre, University of California, Berkeley and Columbia. An academic expert on diverse themes ranging from political philosophy to development studies, party system, Gandhian studies, Vedic philosophy, Indian tradition and culture, he has authored more than 40 books. Few of his important books include Relation between Politicians and Administrators at the District Level; Uncertain Verdict: 1969 Elections in Four States; Dialogues on Development; Self and Society: A Study in Gandhian Thought; Gandhi: Soundings in Political Philosophy; Understanding Gandhi; Democracy in India: Form and Substance; Economy, Democracy and the State: The Indian Experience; Beyond Ego’s Domain: Being and Order in the Veda; Samsakaras in Indian Tradition and Culture; Perspective on Political Order: East and West; India’s 2009 Elections (co-edited with Paul Wallace), etc. He has also contributed papers and articles to numerous seminars, conferences and journals.
Essays on Modernism, Democracy and Well-being