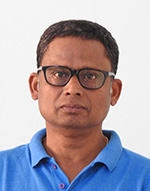 Prasanna Mohanty is a journalist and researcher with three decades of professional experience. Most recently, he was working as Editor, Policy, with India Today Group until June 2021. He writes on public policy, politics and governance. His area of work includes economics, social, socio-economic development, law and justice and environmental governance. His articles have been carried in the group’s various platforms, India Today, Business Today, DailyO and Aaajtak.

Prior to this he worked with Delhi-based think tank Thought Arbitrage Research Institute (2014-2018) as Principal Consultant where his work involved macroeconomics, corporate governance and sustainability.

Earlier he was Deputy Editor with Governance Now (2009-2013), a specialized fortnightly magazine on public policies and governance, in which wrote on public policies covering a wide range of area, including national security, tribal rights, rural development and environmental governance. He has worked with several national dailies and digital platform before that: The Statesman (1991-2000), Deccan Herald (2000-2001), TheNewsPaperToday of India Today Group (2002-03), Delhi Mid-Day (2003-05), IBN7 (2005-09) and News9 (2009). He was awarded for excellence in human development reporting in 1999.

He is a contributing author of “Handbook for Independent Directors” (LexisNexis, 2015, 2016), research contributor to “CSR in India: Steering Business Towards Social Change” (LexisNexis, 2017) and co-authored a chapter in OUP’s “Corporate Governance in India: Change and Continuity” (2016).

Prasanna did his B.Sc. (Hons) in Chemistry and has master’s degree in Journalism.

He is an avid photographer and wildlife enthusiast. Lately, he has taken into birding and bird photography. He likes to travel, meet people and learn their lifestyle.