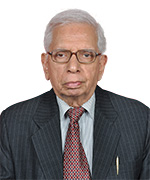 Dr Chawla had a brilliant academic career at Birla College at Pilani, from where he topped in the BCom and MCom degree examinations of the University of Rajasthan. He remained a teacher in his entire career from 1955 to 1994. Much of his academic career from 1955 to 1975 was spent in the Universities of Rajasthan and Udaipur, first as a lecturer and then as a reader in the Faculties of Commerce and Management. He secured his PhD degree on personal taxation in India. It was published as a book in 1972. He moved from Rajasthan to Bombay (later, Mumbai) to join the NIBM in 1975 in the disciplines of bank finance, credit management and allied academics. In this tenure, he pioneered studies in bank treasury management and bank balance sheet management. Dr Chawla conducted several professional training programmes, seminars and conferences for top managements of banks. He has participated in several conferences and seminars abroad.

He was the founder-president, Bankers’ Investment Dealers Club, an association of money and securities market dealers of banks, established to activate the dormant treasuries of banks. He was a member of several RBI and Indian Banks Association Committees.

Dr Chawla has authored/edited 10 books, most of which were published by NIBM. He has published many papers in journals, Indian and foreign, and in financial newspapers.

He spent two years, 1979–1980, abroad as a consultant in financial systems and public finance, Commonwealth Secretariat, London. In this capacity, he taught at the Eastern and Southern African Management Institute, Arusha, Tanzania. He went back to that Institute as a consultant for tenures of two to six weeks during 1981–1983.
Evolution of Banking System in India since 1900