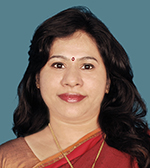 Nidhi Maheshwari, Ph.D., is a Scientist at the Strategic Behaviour Division, Defence Institute of Psychological Research (DIPR), Defence Research and Development Organisation (DRDO), Ministry of Defence, Government of India, Delhi. She specializes in the area of Strategic Behaviour Analysis, particularly Assessment and Management of Psycho-bio-social Markers of Combat Stress Behaviours, Combat Motivation and Morale, Rumour and Propaganda Management (Psychological Operations), as well as Special Forces Profiling. She has obtained her doctorate degree from University of Rajasthan, Jaipur. As a psychologist, Dr Maheshwari has been employed at various Services Selection Board (SSB) for the assessment and selection of officers of Indian Army, Navy and Air Force. As the principal investigator, she has pursued several research projects for Indian Armed Forces. Also, several need-based assessment tools and manuals have been developed and delivered by her. Besides her contribution to various books and journals, she has authored a field guide on assessment and management of combat stress behaviours for Indian soldiers. She has conducted various training programmes on strategic issues in numerous fields and forward locations of Northern and Eastern Command of the Indian Armed Forces. She has also been a guest speaker cum faculty to various seminars/courses at institutions such as National Security Guard (NSG), Army War College and Military Intelligence Training School and Depot, apart from various leading universities of India. She has been a recipient of the research fellowship namely NET-JRF by University Grants Commission in 2001. She is also, the Young Scientist Awardee (2006) and the Technology Group Awardee (2011). In 2013, her book on military psychology entitled Sainya Manovigyan was awarded the DRDO Rajbhasha Award. She is a member of the American Psychological Association (APA), International Association of Applied Psychology (IAAP), the Indian Science Congress Association (ISCA), the Centre for Land Warfare Studies (CLAWS), the Administrative Staff College of India (ASCI), the Industrial Psychiatry Association of India (IPAI) and the National Academy of Psychology (NAOP).
Military Psychology