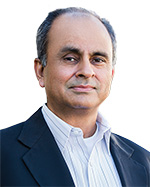 The inspiration and perspective for The Consumer Revolution: Tipping the Balance of Power comes from Naren’s 30-year career in the high-tech industry. He started his professional journey with a bachelors in computer science from the Indian Institute of Technology, Kharagpur, and a masters in computer science from the University of California, Santa Barbara. This provided him an intrinsic understanding of the high-tech industry at work since the dawn of personal computing.

From there, Naren moved to Stanford University for his MBA degree, which he completed in 1992. After Stanford, Naren was hired by Microsoft Corporation to work on its product strategy efforts for interactive television, and subsequently the Internet.

After Microsoft, Naren worked at Trilogy Corporation, an enterprise software and dot com incubation company in the late 1990s. After Trilogy, Naren held the position of president at cFares Inc., a travel metasearch company similar to Kayak, and subsequently, Founder at MetaRail Inc., a networked commerce platform company.