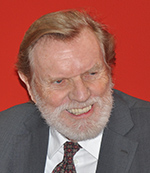 John Naisbitt, Chairman of Naisbitt China Institute, has been in the limelight of the publishing world since 1982, when his book Megatrends was published. As a New York Times number one bestseller for almost two years, it was one of the publishing’s greatest success stories, selling more than 14 million copies in 57 countries. The Wall Street Journal called his work “triumphantly useful … taking bearings in all directions and giving us the courage to do the same.”

In his early career, John Naisbitt has been an executive at Kodak and IBM. At the age of 34, he was appointed as the assistant secretary of education to President John F. Kennedy. After the president’s assassination he became a special assistant to President Lyndon Johnson. Urged by the social and racial turbulences in America’s cities, John Naisbitt began analysis of social, economic, and political developments in the United States, which led to the publication of Megatrends in 1982.