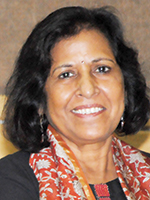 Jaishri Jethwaney did her doctorate from the School of International Studies JNU, in media and elections, which included extensive fieldwork in India, Germany and the USA. She did her master’s in political science from the Hindu College, Delhi University; postgraduate diploma (PGD) in advertising and public relations and PGD in journalism from RP Institute of Mass Communication, New Delhi. She went to New South Wales for her fellowship in public relations. After a long stint at the Indian Institute of Mass Communication spanning over 25 years as Professor and Program Director until 2016, when she demitted office she joined the Institute for Studies in Industrial Development (ISID)—a public funded, national-level policy think tank working on media policy issues. Currently, she is a senior ICSSR research fellow based at ISID. The area of her present research is ‘Wages and related issues in the news media industry in India’. Professor Jethwaney has been a lead communication expert for many international consultancies taken on behalf of UNESCO, UNICEF, United Nations Population Fund, World Health Organization, United Nations Population Fund among others. She is on the board of studies of several central and state universities. In her long career, she has designed and anchored more than 150 training programmes of various durations in the areas of corporate communication, advertising, social marketing, disaster communication and CSR, among others. She has been a visiting faculty to many coveted organizations, including the National Judicial Academy, Bhopal, and the LBS National Academy of Administration, Mussoorie, Ordinance Staff College, Nagpur, and Power Management Institute, among others.

Among the many books she has authored and co-authored, some are When India Votes (2019), Social Sector Communication (SAGE, 2016), Corporate Communication (SAGE, 2018), Public Relations Management, 3rd edition (2015) and Advertising Management, 2nd edition (2012). She has contributed to the SAGE Encyclopedia on Corporate Reputation in 2016 and has chapters in many books.

Among the many awards that Professor Jethwaney has received, some are the Exceptional Woman of Excellence by Women Economic Forum, 2019; Sahyog–Sahyadari (Doordarshan) award on leadership in mass communication teaching, 2014; Best Professor award by World Education Congress, 2013, and the Leadership award in PR academics from the PRSI in 2010.
Detailed CV at http://isid.org.in jjethwaney@isid.edu.in