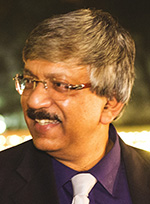 Indranil Mitra was educated at Modern School, New Delhi, and St Stephen’s College, University of Delhi. He did his postgraduation in physics from the Department of Physics and Astrophysics, University of Delhi. He later joined NTPC Limited as an executive trainee in the HR department and completed Post Graduate Diploma in Personnel Management and Industrial Relations from Punjabi University, Patiala.

In his 30-year career in HR, he held various positions of responsibility in the company’s coal- and gas-based power plants, a subsidiary, and the NTPC Corporate Centre in New Delhi. During Indranil Mitra this time, he designed and implemented various HR/HRD initiatives in NTPC. Subsequently, he joined its apex-level training center, the Power Management Institute, Noida, as Senior Faculty Member in HR and Organization Behavior. He is a certified neuro-linguistic programming (NLP) practitioner and has also obtained certification in TA 101.

Indranil’s lifelong interest in transactional analysis (TA) led him to develop a workshop titled “Building Interpersonal Skills through Transactional Analysis,” which he has been conducting at the institute. He wrote this book to make this remarkable technique for self-development and personal growth accessible to a wider audience. He has also co-authored and edited a book, Manthan: Art and Science of Developing Leaders with K. K. Sinha and Ajay Soni, published in 2017. He lives in New Delhi with his wife and daughter.

He is keenly interested in literature, philosophy, music, drawing, art and culture, and bridge.