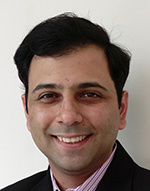 Hushidar Kharas is a passionate marketeer and technophile. He has built campaigns for large customer brands over the last 10 years. After a stint at the Future Group, working on the personal care brand Wild Stone, he moved to Yum Restaurants India where he built the digital and customer engagement practice for KFC India from scratch. His work on the launch of KFC WOW resulted in a Webby, an international award. He was also responsible for setting up online ordering for KFC. He went on to lead digital marketing for Star Sports, building a wildly engaged (and often demanding) base of fans and helping create new properties such as the Pro Kabaddi League and the ISL. His work on the Pro Kabaddi League launch resulted in the campaign winning a Clio Award. He enjoys working on direct- customer-facing media including social and PR, which has given him first-hand experience of the pleasures and pitfalls of the always-on, crisis-prone content marketing paradigm. Hushidar lives in Mumbai with his wife Parinaz and three-year-old daughter Taraneh. He is an avid traveler, amateur photographer, and occasional biker.