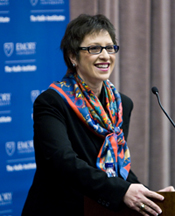 Holli A. Semetko, PhD is vice provost for international affairs and director of the Office of International Affairs (OIA) and the Claus M. Halle Institute for Global Learning, and Asa Griggs Candler Professor of Media and International Affairs at Emory University. An award-winning scholar with more than 90 publications, her research on communication, information and public opinion in campaigns and international contexts extends from the United States, Turkey, and the European Union (EU) to India, China, and Korea. Most recently, she published the Sage Handbook of Political Communication (May 2012), which includes 41 chapters by leading scholars around the world on the latest research and developments in the field. Dr. Semetko is a member of the Council on Foreign Relations, an advisor to The Carter Center China Program, and board chair of Emory’s Confucius Institute in Atlanta. She sits on a number of non-profit boards and is a consultant to academic institutions and international media. She has held elected offices in the American Political Science Association, International Political Science Association, International Communication Association, and the World Association for Public Opinion Research. Her networks in the fields of politics and government, public opinion, and media span the globe. Before arriving at Emory in 2003, Dr. Semetko lived abroad first as a graduate student completing her MSc and PhD at the London School of Economics and Political Science in the UK, then as a research scholar in Germany, and later as a professor in the Netherlands. She received the Samuel Beer Prize for the best dissertation on British politics, and a fellowship from the German Marshall Fund of the U.S. supported her research in Germany. She had held teaching and research positions at the Joan Shorenstein Center on the Press, Politics, and Public Policy at Harvard University’s Kennedy School of Government, Syracuse University’s Maxwell School of Citizenship and Public Affairs and the S.I. Newhouse School of Public Communications, and the University of Michigan. In Amsterdam, Dr. Semetko spent eight years as professor and chair of Audience and Public Opinion Research and served as chair of the Department of Communication Science. She was founding chair of the board of the Amsterdam School for Communication Research (ASCoR), a school for advanced research recognized by the Dutch Academy of Sciences (KNAW), where she remains an honorary professor. Major grants from the EU and Dutch National Science Foundation supported her research in the context of European governance, campaigns, and the economic integration process. Since her arrival at Emory in 2003, the university launched new international programs and partnerships with nations in Asia, Africa, Europe, Latin America, and the Middle East and North Africa. She has led numerous delegations to Asia, including China, India, Singapore, and South Korea, and has been a frequent visitor to Turkey, Morocco, and destinations in the EU. Her work has helped to obtain support from foreign governments and foundations to launch Korean at Emory in 2007 and the annual India Summit in 2010, and to expand Chinese language and culture offerings. As director of the Halle Institute for Global Learning, Dr. Semetko launched several new programs, including the endowed Turkish Lecture Series; Cartooning for Peace at the United Nations and Cartooning for Peace and Health at Emory; and the expansion of the Halle Institute’s study trip program from Germany and India to Turkey, China, Korea, Brazil, and Indonesia. She established the Halle Institute’s research program in 2004 to advance faculty research through expert meetings and conferences at Emory and abroad. A wide range of cosponsors, such as the European Central Bank; Federal Reserve Bank of Atlanta; local offices of consul generals for France, Turkey, the UK, and Germany; and Nanjing University’s Institute for Advanced Studies in Humanities and Social Sciences have helped to make symposia and other research events possible. Hundreds of scholars have benefited from the program. Dr. Semetko launched the Knowledge Futures initiative, an interdisciplinary program that sponsors conferences, panels, and speakers to address critical issues about the digital, mediated and wireless world. Alongside a team of Emory faculty and students, Dr. Semetko is already planning next year’s India Summit, which will take place February 21-23, 2013. Cosponsors over the past three years have included the India, China & America Institute, the Embassy of India in the United States, WIPRO, and the Confederation of Indian Industry (CII).
The SAGE Handbook of Political Communication
On Message 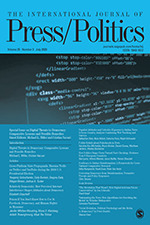