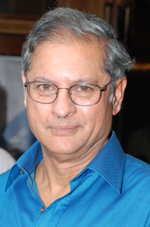 Hiranmay Karlekar, a distinguished Indian journalist, is Consultant Editor of The Pioneer and, currently, a member of the Animal Welfare Board of India, India’s apex governmental body dealing with animal welfare. Mr Karlekar frequently writes on animals in his column which appears in The Pioneer every Thursday and has also written about them in The Tribune and the Outlook magazine.

A former Nieman Fellow at Harvard (Class of 1967), Mr Karlekar, in his career as a journalist spanning four-and-a-half decades, has been Editor of Hindustan Times, Deputy Editor of The Indian Express, and Assistant Editor of The Statesman and the Hindusthan Standard, an erstwhile publication of the Ananda Bazar Patrika group in Kolkata. Starting his journalistic career with Ananda Bazar Patrika as a Staff reporter in 1963, Mr Karlekar has also been Associate Editor of Aajkaal published from Kolkata.

Apart from his innumerable journalistic writings, Mr Karlekar’s publications include two Bengali Novels, Bhabisyater Ateet (1994) and Mehrunnisa (1995), the latter based on Bangladesh’s Liberation struggle, a socio-political work in English, In the Mirror of Mandal: Social Justice, Caste, Class and the Individual (1992), and Bangladesh: The Next Afghanistan? (2005). He edited—and contributed two chapters to—Independent India: The First Fifty Years (1998), an anthology of essays published to mark 50 years of India’s independence. Mr Karlekar is a keen photographer.