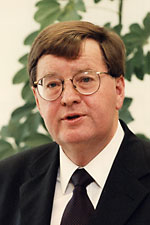 In 1999 Professor Klingemann was elected foreign member of the Finnish Academy of Science and Letters, and in 2001 he became member of the Deutsche Akademie der Naturforscher Leopoldina. He is also Honorary Senator of the University of Ljubljana, Slovenia, and doctor honoris causa in philosophy of Örebro Universitet, Sweden, and doctor honoris causa of the Social Sciences of the Universiteit van Tilburg, The Netherlands. His current research interest is in the field of democratic politics with special attention to the persistence of democratic regimes and the quality of the democratic process.